Students and Attention: An Interesting Analysis 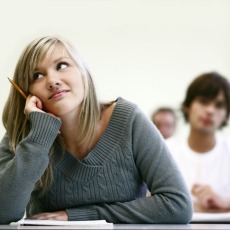 Most teachers daily confront the reality that student attention wanders in class. They can be seen nodding off, sleeping, gazing distractedly at some point other than the front of the room, texting, or working on something for another class. It’s a problem, and one that teachers often find hard not to take personally. Dealing with the emotional reaction engendered by inattention is easier when it’s more fully understood, and here’s an example that illustrates why.

It begins with some specific questions. How many students aren’t paying attention at any given moment in a class? How long are these lapses? How many of them happen per class session? Are there times during the period when student minds are more likely to wander? Are there teaching methods that can be linked to higher or lower levels of attentiveness?

These questions were all addressed by a study of inattention conducted in three different chemistry courses. Students in those courses used clickers to self-report (to the research team, not the course teacher) lapses in their attention. After each lapse, students pressed one of three buttons on the clickers: one button indicating a lapse of a minute or less, another button for lapses of two to three minutes, and a third button for a lapse of five minutes or longer.

“Students reported lapses in attention only after they realized their attention had wandered. As a result, the student data collected in this study represent times immediately following the occurrence of attention lapses, not the lapses themselves.” (p. 1,442) A fairly complex set of methods was used to analyze the attention lapses and compare them with what was happening in class at the time. These methods are explained in the article.

“Contrary to common belief [references to this belief are cited], the data in this study suggest that students do not pay attention continuously for 10-20 minutes during a lecture. Instead, their attention alternates between being engaged and nonengaged in ever-shortening cycles throughout the lecture segment.” (p. 1,442) Some students reported lapses of 30 seconds after the class began, followed by more lapses about four-and-a-half minutes into the lecture.

Most students reported short lapses (a minute or less) significantly more times than the medium- or longer-length lapses. Were they feeling guilty and not wanting to admit to being mentally away for longer time periods? Or were they trying to re-engage once they realized their minds had wandered? These are questions for future research.

Students consistently reported fewer lapses when teachers were using “nonlecture pedagogies,” (p. 1,442) including things like demonstrations, group work, and clicker questions. This result confirms well-established findings that students are more engaged and attentive when they are doing something other than listening to the teacher lecture. In addition, this research identifies a follow-up benefit. “Equally important are the data that show that students report significantly lower attention lapses during lecture segments immediately following a demonstration or clicker question than they did in comparable-length lecture segments prior to the use of these pedagogies.” (p. 1,442) It appears that the change of pace, coupled with the chance for activity, refreshes students in a way that makes it easier for them to more closely attend when the lecture resumes.

The teaching implications of this research are clear. Teachers should try to improve student attentiveness by using a variety of instructional approaches, especially those that actively engage students. These activities enable students to encounter the content in different formats and make it easier for them to pay attention after the activity has ended.

© Magna Publications. All Rights Reserved. Use of any content without permission is strictly prohibited.