How Accurately Do Students Track Their Participation? 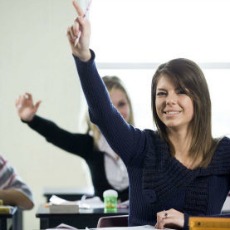 Grading participation presents a number of challenges. If instructors rely on their sense of who participated, how often, and in what ways, that can be a pretty subjective measure. After all, besides noting who’s contributing, the instructor needs to listen to what the student is saying, and frame a response while keeping the larger discussion context in mind. Is the discussion staying on track? Are there points that have yet to be made? If instructors opt for a more objective system, they face the cumbersome task of comment counting during the actual discussion. While listening to the student, the instructor must find the student’s name and record the comment. It requires a challenging set of multitasking skills.

These students in three sections of the same undergraduate human development course (there were between 51 and 57 of them in each section) were instructed in the syllabus to write a phrase or a sentence to describe each comment they made during designated discussion periods in the class. Comments that could be counted included asking a question, answering a question, or sharing an opinion about an issue being discussed. Students recorded their comments on cards provided by the instructor, and students gave those cards to graduate teaching assistants at the end of each period. Students recorded their comments on 20 discussion days. They received two points for the first comment made in class and one for the second, for a maximum of three points per day. Participation credit counted for 4 percent of the total course grade.

Unbeknownst to the students, the graduate students observing in the class on the 20 discussion days recorded student contributions on five of those days. Students were not told what the graduate students were doing in the class. The researchers explain, “The range of student-observer correlations across all sections and units proved to be 0.71 to 0.95. . . . These correlations were not significantly different (p = 0.19).” (p. 44) By statistical measures, the correlations were large with 95 percent of them 0.80 or greater.

Based on their findings, this faculty research team recommends having students keep track of their participation using this approach: “Writing one’s specific comments on an official record card [provides] a more accurate basis for determining participation credit. Assigning participation credit by using this technique would help assure students of a fair assessment.” (p. 45) They also say that the system is manageable in classes of this size. In larger classes, students could be divided into subsets, with each subset earning credit on a designated day.

Reprinted from “How Accurately Do Students Track Their Participation?” The Teaching Professor, 25.9 (2011): 2.