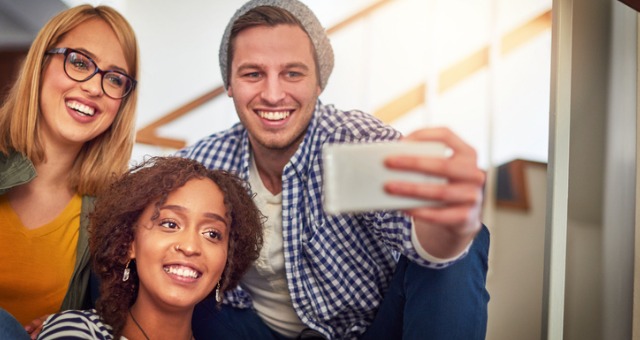 The proliferation of low-cost, easy-to-use technology has opened the door for students to discover new ways of acquiring and constructing knowledge and representing their thinking (Bene 2015, iv). After attending an educational technology conference last year, I opted to extend my classroom pedagogy to better incorporate technology and promote active learning.

With my new paradigm shift in place, on the first day of class I asked my statistics students to download an application called Clips (although any video app would suffice). I also invited them into a shared Google Drive where they would upload their soon-to-be created videos.

To introduce the activity, I opened the Clips app on my iPad and created a short real-time video recording of the students while simultaneously projecting the output on the screen in the front of the classroom. Taking less than one minute of class time, I quickly demonstrated the editing tools that are available on the app.

After being given an applied problem to solve as a group, students were directed to open the Clips app, make sure that each face in the group was shown, explain the complete solution process to the given problem, and then to upload the video to the shared Google Drive as their exit ticket out of class. I also allowed them to put their videos through Snapchat filters to allow them some additional creativity.

Aligning with several scholars who have studied how digital video enables a new type of storytelling and narrative construction (Beilke & Stuve 2004,165; Hull & Nelson 2005, 253; Soep 2006, 202), I discovered that grading group clips as an alternative to the quintessential “one-minute paper” provided a wealth of new insight into their understanding. Not only was it helpful for me to hear students discuss how they approached the problem they were given to solve but hearing their voice inflections and tone provided much more than any written solution ever has in my 25 years of teaching! The video creation became a multi-voiced classroom narrative tool for metacognition.

All of these facets allowed me to better gauge their misconceptions and adjust accordingly in subsequent classes. Additionally, the videos provided another exposure to career readiness skills in the form of group collaboration and cooperation since the students had to assign roles on who was going to present which part of the applied problem for the video.

For the first time in a long time, the daily grading was quick … even enjoyable. Their grades were group-based, which cut my grading into about a fourth of my normal load when assessing exit ticket papers. I found the recordings of their nervous giggling infectious, and I appreciated seeing their personalities caught on camera. This activity helped me to get to know my students and their understanding of the content at a deeper level. However, as with any activity, overuse would be detrimental to the novelty and effectiveness of this assignment. I’ve found that once in each major thematic unit of the course content works well.

There were only two minor drawbacks that I encountered as I implemented these video creation alternatives to an exit ticket. First, there were a few students who had Android devices, and therefore could not use Clips app. Fortunately, there are many appropriate video recording apps for those students. Secondly, with so many students using the WiFi, the speeds slow down and make uploading the videos a problem. That said, as I continue to implement the activity to other content and courses, I grant due date extensions (up to 24 hours) as needed when there is poor Wi-Fi speed.

Vicki Ingalls is an associate professor of Mathematics at Tiffin University.