The Front Row: A Small Group Feel in a Large Class 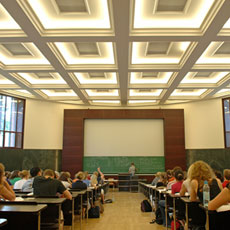 Frustrated with the traditional lecture format in an upper-level chemistry class that enrolled more than 100 students, and envious of my teaching assistants who spent time in small recitations working on problem solving with my students, I designed an approach I call the “The Front Row.” It brings a small group feel into a large classroom.

The class had three one-hour lectures a week, plus six one-hour sections of recitation. I stopped giving the Friday lecture when I implemented the Front Row format. Two students from each section (a different pair each week and announced on the previous Wednesday) would sit in the front row, and I would hold a recitation-style discussion with them, while the other students watched and listened.

I opted for a fast-paced hour of short question-and-answer items, solving problems, and short questions about units or values for constants with the goal of trying to touch on as many topics from the past two lectures as possible. Questions posed on Fridays were projected onto a side screen. Sometimes we did work on larger problems, but we always broke them down into small, manageable parts. I expected the entire class to work on the problems posed, but those in the front row had to go to the board and present the solution.

If students had questions about how to approach a problem, they could ask me, and at times we worked together to find an answer. I used this interaction to clarify what students were expected to understand and do, and they reported that the activity did make clear what I expected in answers. Some weeks, I used Fridays to explore new material, reformatted from a lecture format to a discovery mode. I would walk students through new information via some well-chosen examples, gradually providing new information for them to use.

The recitation representatives casually competed with each other during the process. Throughout the hour, a teaching assistant sat to one side, “keeping score,” which enhanced the inter-recitation rivalry. The TAs told me that more students had questions during recitation as they anticipated upcoming Front Row challenges.

I chose to use two students from each section so that they could work together and no individual would be singled out for an answer. Each pair of students had a team name written on a clipboard, and when they were ready to answer a question or solve a problem, they would raise their clipboard. On occasion, when no one in the front row could provide an answer, any class member could offer one.

Although the front row and I engaged in a lively exchange on Fridays, the strategy could make it easy to lose the rest of the class. To avoid this, a problem covered on a Front Row Friday frequently appeared on a quiz or exam or in homework. This tactic made it clear that Friday was not a day off for the rest of the class, and it did positively influence both attention and attendance on Fridays. In evaluation feedback, students not in the front row also reported that they benefited from seeing what their peers could and couldn’t do and from what they knew and didn’t know.

Coupling the approach with my commitment to a “teach less/learn more” philosophy, I found that I could still cover most of the material that I did in the traditional lecture format, sometimes faster. I knew this format was working when students started asking to participate in The Front Row. At the end of the class, on class evaluations, there were significant increases in their evaluation scores of me as an instructor, notably, “The instructor showed concern for the students” and “The instructor seemed to enjoy teaching the course.” Evaluations also provided the opportunity for written feedback. Several students wrote, “I love Fridays!” One wrote, “This class was designed in a very tricky way—I managed to learn a lot about a relatively difficult subject, yet it was fairly painless. Tricky!” As for me, I have to be honest and say I found Fridays exhilarating.

John Allison is a professor and the director of forensic chemistry at the College of New Jersey.