Why Students Should Be Taking Notes 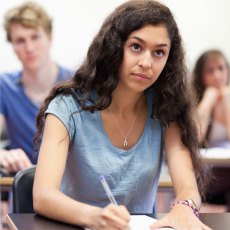 Students nowadays can be pretty demanding about wanting the teacher’s PowerPoints, lecture notes, and other written forms of the content presented in class. And a lot of teachers are supplying those, in part trying to be responsive to students but also because many students now lack note-taking skills. If they can’t take good notes, why not help them succeed by supplying them with notes?

The problem is that “the ability to take in information and make it one’s own by processing it, restructuring it, and then presenting it in a form so that it can be understood by others (or by oneself at a later point)” is one of those “basic skills” that is useful throughout life. (p. 95) If students don’t have that skill or have a feeble version of it and they never take notes, when does the skill get developed? “With PowerPoint summaries, students have the product—good notes—but skip the process—the actual taking and reconstructing of notes.” (p. 95)

There is also accumulating evidence (the article below references seven studies) that giving students teacher-prepared notes or PowerPoint slides does not improve their performance. Students need to take notes in ways that are meaningful to them. It also helps when notes are restructured. The material presented in class is usually ordered in a linear fashion. “It makes sense to return to one’s notes and organize them in a way that reflects the connections between ideas rather than simply the chronology of presentation.” (p. 95)

But how do we sell students on the value of taking notes for themselves? They might be persuaded if we had evidence that doing so may improve exam scores. And that’s exactly what this study showed.

The research design is clever—a good example of the kind of classroom research that teachers can conduct. Students (mostly juniors and seniors) in this large social psychology course attended a two-hour-per-week “chalk and talk” lecture. Using a random selection process, 20 percent of the class was required to submit (two days later) a note restructuring assignment that was graded. They also took a 55-question multiple-choice midterm. “The hypothesis was that students would score higher on weeks in which they were randomly assigned to complete a note re-structuring assignment (as opposed to weeks in which they were not).” (p. 97)

That hypotheses was confirmed and at an impressive level. “Students averaged 72 percent correct (SD = 25) on questions from the week they completed a note-restructuring assignment, whereas they averaged 61 percent correct (SD = 14) for other weeks.” (p. 97) That’s 11 raw percentage points, or the equivalent of a full grade.

Part of what explains these results is the creative design of the note restructuring assignment. It had three parts. First students had to submit typed copies of their notes that were restructured and reorganized. They were graded on the accuracy, comprehensiveness, clarity, and coherence of their notes. Second was the “foot” part of the assignment in which students had to summarize the main point of the lecture in 30 words or less. The “foot” here referred to a famous rabbi who was asked to summarize all of Judaism while standing on one foot. “Similarly, students were asked to summarize the main point of the lecture simply and briefly, ‘as if’ explaining it on one foot.” (p. 97) And finally, there was the “socks” part of the assignment. Here students were asked to select one important detail from the material presented in class and describe it in 150 words. Then they had to relate that detail to the most important point of the lecture. The “socks” moniker referred to UCLA basketball coach John Wooden, who during the first team meeting had players practice putting on their socks. He didn’t want any player getting slowed down by a blister, and he wanted to make the point that small details matter.

Students should find out in college (as they will in life) that they don’t always get what they want. They need to take their own notes and not think they are excused from doing so because they’ve got the teacher’s notes. Research results such as these don’t preclude teachers from supplying students with written materials, maybe an outline of the day’s topic or a diagram, but we do so needing to remember “that it is the process, the engagement with the material—the cognitive exercise involved in recollecting, summarizing, reorganizing and restructuring [the notes] that actually matters the most.” (p. 98)