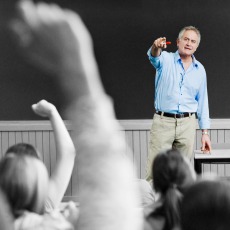 But I found something in the book that was even older. Eble includes a discussion of and several quotes from an 1879 book (actually the ninth edition) by Josiah Fitch titled The Art of Questioning. Eble writes that it’s a small book and was originally aimed at British Sunday school teachers. Here’s the quote that caught my attention.

For indeed, the whole sum of what may be said about questioning is comprised in this: It ought to set the learners thinking, to promote activity and energy on their part, and to arouse the whole mental faculty into action, instead of blindly cultivating the memory at the expense of higher intellectual powers. That is the best questioning which best stimulates action on the part of the learner; which gives him a habit of thinking and inquiring for himself; which tends in a great measure to render him independent of his teacher; which makes him, in fact, a rather skillful finder than a patient receiver of the truth. (Quoted on p. 91 in Eble’s book, pp. 138–39 in Fitch’s book.)

The language is gendered and far from our current vernacular, but even so, the message is clear and just as relevant today as it was then. The power of teachers’ questions lies in their ability to generate students’ questions. I don’t think most of the questions we ask students lead to that end. My dear friend and good colleague Larry Spence repeatedly tells me that teachers should stop asking questions. They do not promote learning nearly as well as the questions students ask themselves, their peers, and their teachers. Too many of our students haven’t gotten beyond asking questions that are banal and trivial—“Will there be multiple-choice questions on the test?” I know questions like that are important to students, and I know why they ask, but we must help them find their way to better questions.

I was listening to a panel of science “communicators”—two professors and one novelist—who write and speak about science to those outside the scientific community (Science Friday on National Public Radio, moderated by Ira Flatow, March 29, 2013). One of them made the point that he became interested in science when he figured out there were no answers to the most important questions (the “who are we?” “why are we here?” “what does life mean?” kind of questions). He became a scientist not because science can answer those questions but because “science lets you get close to the questions.” I thought that was an interesting turn of phrase. Getting close to a question doesn’t necessarily mean getting close to the answer. It usually means finding, in what looks like an answer, more questions.

Questions don’t play the role in learning that they could or should. Teachers can change that.

Reprinted from Observations about Questioning, The Teaching Professor, 27.5 (2013): 4. © Magna Publications. All rights reserved.