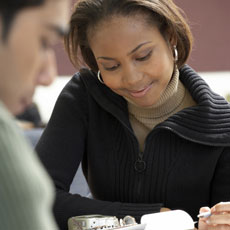 If the course involves a graded group project, should instructors let students form their own groups or should the instructor create the groups? This decision is not always easy or obvious. Some students lobby hard to form their own groups, arguing that knowing each other ensures that they will be able to work together productively. On the other hand, in the world of work, most of the time employees do not get to pick their collaborators. There’s a task, and those with knowledge and relevant skills are formed into a group and assigned to complete the project, solve the problem, or develop the product.

Behind those questions is a more basic one: Do students perform better in self-selected groups or in instructor-formed groups? That question was explored in the study referenced below but with a different twist. “Unlike prior studies, which have focused on group formation from an instructor’s perspective, our study provides a student characterization of group-formation effects.” (p. 15)

The students who participated in the study worked in groups of four in an introductory financial accounting course. They completed a two-part, six-week project that involved analyzing accounting practices and the financial health of real and fictitious companies. The project was worth 25 percent of their final grade. The qualitative data was collected from journal reports students wrote about their group experiences. They described what was happening in their groups and their perceptions of those experiences. These journals were collected at four different times during the project. Participants were also surveyed before, during, and after the project’s completion. They were asked about group experiences, group processes, and the outcomes.

Students in this course, which was offered in multiple sections, had the option of forming their own groups or being assigned to a group by the instructor. Groups were formed during the fourth week of class. Fifty of the groups were self-selected and the instructor formed the other 34 using a random-number-generation process.

The qualitative data revealed one significant but predictable difference between the groups. Self-selected groups got off to a much quicker start on the project. Members already knew each other and could start to work immediately. In the instructor-formed groups, there was a period of getting to know one another before they could work productively on the task.

Interestingly, “although student-selected groups perceived they produced higher-quality work, the actual grades assigned to the group projects did not differ between group formation conditions.” (p. 26) Despite this, these faculty researchers stop short of recommending that faculty always let students form their own groups. “Although we found that student-selected groups generally had a more positive experience than instructor-formed groups, we resist the temptation to conclude that student-selection is the superior method for forming groups. An important achievement by individuals in instructor-formed groups involved learning to develop trust in others with whom they had no prior contact. Indeed, one might view the development of trust as a superior outcome to the comparatively less challenging experience of maintaining the trust that already existed within student-selected groups.” (p. 31)