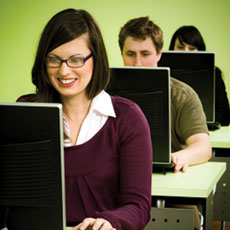 This is an important question because so many institutions now offer regular courses in shorter time frames. It might be a course offered in a monthlong summer session or one taught in January between regular-length semesters. It’s also important because there is a perception among students that shorter courses are easier. How could you possibly do as much work in a four-week course as in a 15-week one?

Grades students earn in courses offered in compressed time frames have been compared with grades earned in semester-long courses, and a variety of analyses (cited in the article referenced below) have shown them to be comparable. Students aren’t earning more A’s (or any other grade) in shortened course time frames, and that supports the conclusion that these short versions of normally longer courses aren’t easier. Another way to ascertain whether compressed courses are easier is to look at the workload, as reported by students, in courses offered in these two time frames. That’s the analysis reported in the study, titled “To what degree do compressed term courses differ in workload rigor from their regular semester counterparts at Brigham Young University?”

It is important to note that this study was done at one institution. Semesters at BYU contain 70 days of instruction spread over a 15-week period. What they call “term courses” contain 34 days of instruction over a seven-week period. The number of contact hours (hours spent in class) is the same for both kinds of courses. Data was collected via a regularly used online questionnaire that asks students about various factors related to each course they are taking. One question asks them to report the number of hours per week spent on assignments outside of class.

Differences in course rigor, defined in this case by workload, were much more pronounced depending on the course and who taught it. For example, in some sections of a general education economics course, students reported spending 56 hours more on course assignments than did students in other sections. In summary of their findings, the researchers wrote, “When disaggregating the workload comparisons by subject, differences in workload between session types tended to be low. … However, significant differences in workload were found among courses, and significant differences were found among instructors of these selected general education courses. Some of the differences were quite large (i.e., over 3 hours per week) depending on the instructor.”

So, if students tell you they’re opting for courses offered in compressed time frames because they think short courses may be easier, you can use this evidence to question that assumption. For teachers, the question lurking in these data relates to the variation in workload and the fact that teachers, even those teaching sections of the same course, weren’t having students work equally hard. Would that be true of multiple-section courses at your institution? If focusing on individual courses and teachers is too politically charged, perhaps the dialogue could begin with a more general conversation about workload expectations for students.