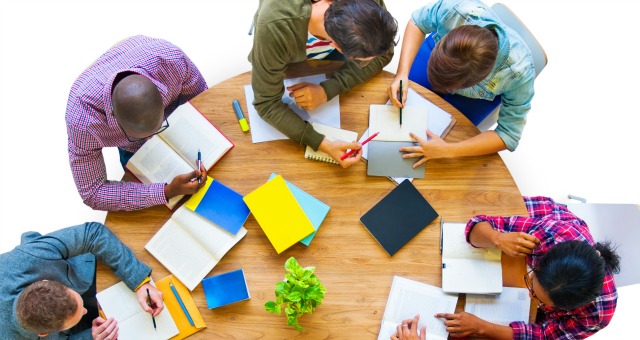 Cooperative learning structures such as jigsaw and think-pair-share are widely used in college classrooms. The two most basic tenets of cooperative learning involve positive interdependence and individual accountability. “Positive interdependence means that group members perceive that the collective effort of the group is essential in order for the individual learners to achieve their goals.” (p. 176) And individual accountability establishes that students are assessed individually on their achievement of the learning goals.

Empirical studies of various sorts have verified that cooperative learning events are related to higher academic achievement more so than are competitive, individualistic learning environments. That doesn’t mean that students always endorse the use of these group structures. Survey research has identified a number of objections raised by students, including having to depend on less well-prepared and less motivated peers and not having teachers at the ready with “right” answers.

Article author Herrmann was interested in whether cooperative learning structures such as the ones above as well as participation (which he defined to include cooperative learning tenets) increased student engagement in discussion sections. The students he studied were enrolled in a large, semester-long political theory course in which weekly lectures were complemented by discussion sections led by tutors (TAs). Students in the experimental sections worked in randomly formed cooperative learning groups to generate a group response to worksheet questions. The tutor then selected one group to present its work to the rest of the class for whole-class discussion. In the control sections, study groups were assigned one of these questions and tasked with preparing a presentation on it. They consulted with the tutor before presenting their material in class.

Students won’t engage in deep discussions with peers unless they see the value of those exchanges in terms of their own achievement.

More interesting results emerged when Herrmann analyzed responses to two open-ended questions about those parts of the tutorial that students did and did not learn from. Twenty-seven percent of the cohort were mostly positive about the cooperative learning experience, and 45 percent were mostly negative. Whether students were mostly positive or mostly negative about the cooperative learning structures was strongly influenced by their tutor. When students were mostly negative, it was because they didn’t think the tutor took enough control of the class. By control, students meant the tutors should clarify which answers were correct and do more teaching. They wanted to be told the answers rather than having to figure them out in their groups.

The results of the research support a conclusion at odds with much of the writing about cooperative learning. “Changing the instructional methods is in itself not enough to discourage a surface approach and promote a deep approach to learning.” (p. 183) Students won’t engage in deep discussions with peers unless they see the value of those exchanges in terms of their own achievement. It boils down to this simple fact: many students don’t believe they can learn content from and with their peers. Much evidence verifies that they can, but they first need to be convinced.

Reference: Herrmann, K.J. (2013). The impact of cooperative learning on student engagement: Results from an intervention. Active Learning in Higher Education, 14 (3), 175-187.