Eureka! An Accumulation of the Best Teaching Advice 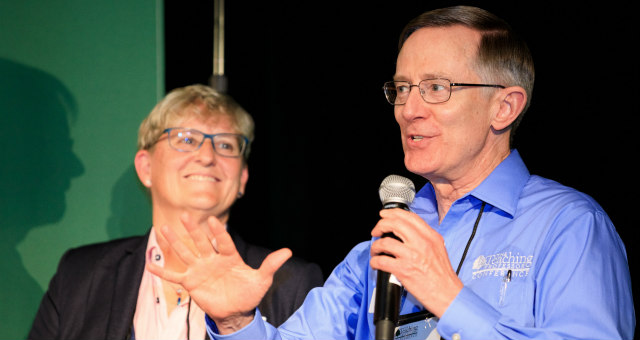 The 2019 Annual Teaching Professor Conference offered numerous tactics and strategies to implement in the classroom, but Ken Alford, PhD, Brigham Young University, took a different approach in his session for instructional vitality and divulged the best teaching advice he’s received throughout his teaching career. Here’s what he’s gathered:

Let your students get to know you—On the very first day of class, Alford shares a family photo and lets his students know there’s life beyond the classroom. He even tells the story of his grandchild throwing his church clothes in the toilet.

“Make yourself real. Let them get to know you,” he says.

Help students get to know each other—Students most likely won’t engage with one another unless you encourage them to do that.

Alford says he starts his courses with a Get to Know You form, and one of the questions on the form is, “What’s something about yourself that you would never tell me unless I asked?” This question allowed Alford to discover he had a U.S. yoyo champion in his class, which ignited organic conversation among his students.

Lighten up a little!—“If you don’t have fun with students in the classroom, you’re doing it wrong,” says Alford. “You’ve already got a captive audience.”

Always be learning—Some hold the philosophy that once graduated with a degree, the door shuts, Alford says. “If there’s no Eureka! moments for the teacher, there will be even fewer of these moments for the students.”

Admit when you don’t know something—It’s a fact that you won’t always know the answer. So, instead considering saying to a student, “If I knew the answer, I would sound smart, but I’m going to find the answer for you.” Then, once you find the answer, teach the entire class how you found it. “I think that’s just as valuable if the students can see the process.”

Engage the entire student—You have to do some goofy things to keep students entertained. One thing Alford does if he sees students drifting is to have random pictures ready at the end of his PowerPoints that he can jump to. If he does see glazed over eyes, he jumps to the picture waiting at the end of his PowerPoint and gives students a challenge. He’ll ask the students, “How is this picture connected to what we’re doing right now?” The picture, always outrageous, has absolutely no connection to the content, but Alford says his students have always come up with a connection. “These are clever, clever students.”

Watch other teachers—Whether you learn something negative or positive from watching others teach, both are instrumental. “And it’s okay to borrow as long as it’s done with love and permission. If we’re not sharing with each other, we’re just doing more work—all of us.”

Front-load relevance—So many times teachers get to the end of a lesson and say, Ta-da! “That doesn’t work with this generation,” he says. “They want the ta-da before the ta-da.”

There is power in examples—Too often Alford says he explains something and will assume his students get it right away. That’s not always the case. Instead, he identifies what he calls his “two canaries.” One canary is the one who “may die of embarrassment from being called upon” and the other is the one that “thinks they know it all.” If both of these individuals understand the lesson, then you’re on the right track.

Right-size your course, your lessons, exams and assignments—When Alford first started teaching, he came right from the military academy and handed out 150-question exams. Nobody does that, he says. Don’t cram as much as you can into an exam, lesson, or assignment. Instead, if you end up adding five minutes of content to your lecture, you’ve also got to take five minutes out.

Tell more stories—Think of the power of stories, Alford says. They illustrate so many concepts, and so often you can be teaching students with a story and they don’t even know it.

Fun with Mad Lib stories—Alford says he creates interactive stories, like Mad Libs, that allow the students to fill in the parts that don’t matter. Then, it becomes the student’s story, and you can teach them a lesson based on their own creation. They’ll be much more likely to retain this information in the future.

Help students see their potential—Many students don’t see the potential in themselves, so it’s important to remind students of their infinite potential.

Alford included many other tips, but he emphasized how an innate passion to teach and the overall desire to keep learning fosters a great teacher.

“Remember, it’s an honor to teach,” says Alford. “And, there’s always room to improve as a teacher.”