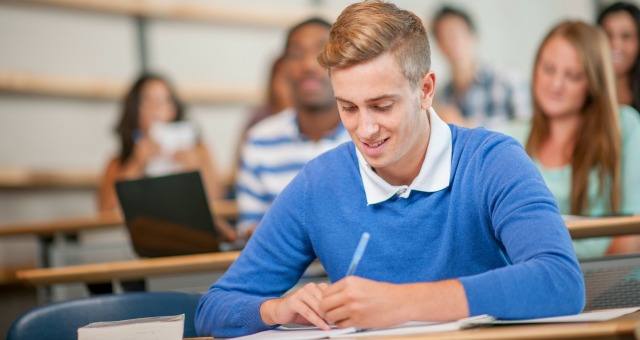 This post shares a couple of items that pertain to student note-taking.

I’m always on the lookout for strategies that develop students’ note-taking skills, and economics professor Mark Maier shares a good one in the recent issue of College Teaching. He assigns a “rotating note taker” in his courses. This student serves as the class note-taker, posting his or her notes on the course management system before the next class session. The notes are graded pass/fail and count for 1 percent of the final course grade. If it’s a fail, the student learns why and is assigned another day to take and post class notes.

Having a designated student taking and posting notes does not relieve other students of the responsibility to take their own notes. According to Maier, “The posted notes serve as an alternative to the student’s own notes. . . .” (p. 146) They may clarify or emphasize a different part of a concept, add more detail, or offer a different perspective.

Maier introduces the assignment on day one. He recruits a student familiar with the learning management system (LMS) to provide the first set of class notes. He also puts instructions about posting notes on the LMS, offers recommendations about attaching files, and suggests making references to the text instead of trying to reproduce complicated graphs. If the class is large, Maier has two students taking and posting notes for each class session.

Here’s a list of benefits that accrue from the strategy.

Taking notes by hand
Next I wanted to mention a couple of studies with findings related to taking notes longhand or with laptops. A study in Computers & Education explains what happened when students who took notes using laptops sat in a designated space in the classroom, with the students who took notes by hand seated in another space. Researchers said they were surprised that “paper note-takers scored significantly higher and laptop users scored significantly lower than predicted by pre-class academic indicators.” (p. 1300). This research team wondered if the absence of distracting computer screens (and the temptation to click over to the web now and then) enabled students taking notes by hand to keep their focus on the content.

A second study (actually three studies) in Psychological Science confirmed the finding, but with more serious results. “In three studies, we found that students who took notes on laptops performed worse on conceptual questions than students who took notes longhand.” (p. 1159) The researchers propose an intriguing explanation. They found that students using laptops for note-taking were more inclined to take things down verbatim: they were just keying in, pretty much word for word, what the teacher said. “Although more notes are beneficial at least to a point, if the notes are taken indiscriminately or by mindlessly transcribing content. . . the benefit disappears.” (p. 1166) When students write longhand, it’s harder to get down exactly what the teacher said (although lots of longhand note-takers still try), so students are forced to process, condense, and use their own words. The value of those activities has been confirmed by research spanning decades. One last interesting detail: Even when the researchers told students not to take verbatim notes on the computer, they did so anyway.