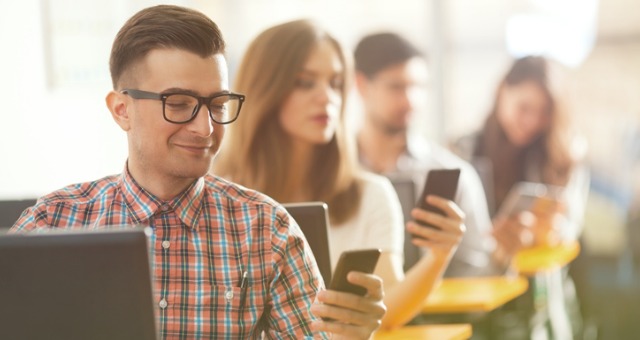 In-class activities can be a great way to foster student engagement in the classroom. Depending on the activity, the results can vary greatly. Sometimes they can fall flat, but every so often an activity manages to hold the students’ undivided attention.

This leads to what my friend Tom refers to as “The Quiet Moment” – that moment where the entire room is silent and the students are all actively engaged in the material, researching and problem solving.  There is magic in that moment, when the gears are turning in their heads and they’re using the tools you’ve set them up with to learn on their own.  I never get tired of it and aspire to have it happening as often as possible.

Recently, I’ve found that an unlikely tool can help unlock these moments. The cell phone, ubiquitous in modern society, has the potential to become the bane of an educator’s existence.  It provides endless distraction, especially in courses that may be perceived as “dry” material.  I should know; I teach taxes.  Even in a class of all accounting majors, I tread a fine line between fostering engagement and putting people to sleep. So, I am in prime territory to fall victim to runaway cell phone use.

Other statistics cited included the number of syllabi with cell phone policies, university policies, and the effectiveness of instructor’s glares.  Ultimately, the majority of students viewed checking cell phones during class as acceptable.

This led me to a couple of conclusions: Cell phones aren’t going away and we can’t ignore them.

So, rather than fight a losing battle trying to prevent cell phone use in class, I have begun to turn the tables on the device, embracing its use in classroom learning. The modern smartphone is as much a powerful computer as it is a telephone.  I no longer view it as a potential distraction.  Instead, it has become a potent research tool that students are already adept at using.

One technique that I employ from time to time in class is this: rather than lecture on a given topic, which in my class may be a certain tax deduction or credit, I will present the class with the topic and then provide multiple situations where this item may or may not apply.  Then I tell them to pull out their phones, research the item, and decide for each situation whether the tax deduction or credit applies.

One recent example – I told the class that one of the hot button issues with the IRS right now is the classification of workers, employee vs. independent contractor.  Not telling them anymore than that, I said, “Pull out your phones!  I want to know why this is an issue and what questions should be asked to workers to help determine their status.” We filled two entire white boards with the potential questions and answers that they came up with.

Some may expect this free and open use of phones in class to degrade into a rampant Facebook and social media frenzy.  That’s not what’s happened in my class.  Rather, I’ve found that when students are empowered to discover the material on their own, they become very engaged, even competitive at times to see who can get the correct answer first.

Another benefit to these activities is that unlike homework where the student may get frustrated and give up, they are able to ask me that gnawing question and I can help them remove that mental roadblock.  Then they can get traction and resume their problem solving. This can happen all too often in unfamiliar territory. A problem gets started, but never finished – only to be looked at the next class with vague memory of having trouble with the issue.

To sum this up, I’ve found that cell phones can have a place in the classroom and can be used for learning rather than distraction. Can you think of a similar activity that might work in your class?  Researching the personal lives of romantic poets? Finding real life applications of theories and equations? Try it out and see if their use can unlock one of those “quiet moments” in your class

This article first appeared in The Teaching Professor on February 2, 2016. © Magna Publications. All rights reserved.