Mindfulness in the Classroom 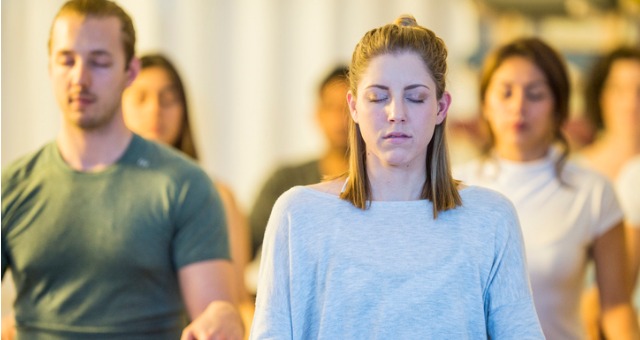 After reading and hearing about the physical and mental benefits of meditation, I decided to take up the practice several years ago. This led to some discussions with colleagues at work, which eventually morphed into the idea of using mindfulness in the classroom. Mindfulness is a way to pause and reflect on the here and now. To be fully present in what is happening in the present, without worry about the future or past. The idea is that teaching this philosophy and using activities and practices in the classroom should allow students to release tension and anxiety so they can focus on the material in the classroom. Rather than coming to my biology class lamenting over the test they just took in another class, worrying about the homework, or making a check-list of “to dos”, the student can release that tension become present with my biology course.

Ten of my colleagues and I formed a Faculty Learning Community (FLC) where we explored the literature on the topic of using mindfulness in the undergraduate classroom and practiced some of the exercises suggested. We met every several weeks for an academic year. The following year and fall semester we continued to meet while discussing how we were implementing mindfulness in our classrooms, the research activities we were engaged in on the subject, and how valuable we found mindfulness in general.

Two camps of thought were expressed. The first focused on how faculty members changed as a result of mindfulness. Even though the goal was to help students use mindfulness, faculty found they viewed things more positively as a result of the work we were doing in our FLC. The second camp focused on how the students were responding. In general, students liked the practices. They found value in them. This was something that grew over time.

At first, most students reported that they felt silly engaging in the activities and/or didn’t see how five minutes of meditative practices could really help. But over the next several weeks, they found themselves looking forward to the practices, welcoming the opportunity to clear their minds so they could in fact focus on biology. Some students even reported that they were using the practices on their own—for example, before starting homework or a study session. One student even reported he started doing a short mindful practice prior to soccer games and his teammates noticed an improvement in his performance.

The practices themselves are varied, and it’s important to try different ones. Not all students like the same things and it’s good to expose them to a variety of techniques so they can find something that clicks for them. We have successfully used five-minute guided meditations, listening to a classical piece of music, reflective writing where I prompt students to write freely about a particular topic, visualizing of a “ball of energy” that students move, Columbian hypnosis (where one student slowly moves body parts and the partner mimics these moves), and focusing on a piece of art (shown on computer screen) for several minutes. This last exercise is helpful for concentration. After the first few minutes, blank the computer screen and ask a few students what they noticed (their observations are usually all over the place). Then show the image again for a few minutes and blank the screen and ask what else they noticed and how it made them feel. With practice, students will fine tune their observation skills and notice details in the image that they didn’t before.

Overall, the five-minute guided meditation sessions seemed to be the most popular with students. They liked the resulting calm and felt it made the classroom space feel more inviting. They also giggled and liked the Columbian hypnosis and said they appreciated physically moving and getting energy out that way. The least favorite for the students was the reflective writing because they didn’t find it relaxing. Students commented that they had to think “too much”. Personally, I think this attitude would change with practice. The first time we engaged in this activity, students were worried they didn’t know the answers, but the second time we did this they realized it didn’t matter what they wrote—they could write “I don’t understand this” over and over again if that’s all that came to mind. This helped students see the activity was more about releasing.

These activities do not take more than 5-7 minutes each and the pay-off can be significant. A wise investment of classroom time.

One final piece of advice is to take time at the beginning of the semester and present the data and research on mindfulness and why it will be helpful for the students. Having them understand why we were engaging in such practices was crucial for buy-in.

Erica Kosal is a professor of Biology at North Carolina Wesleyan College.