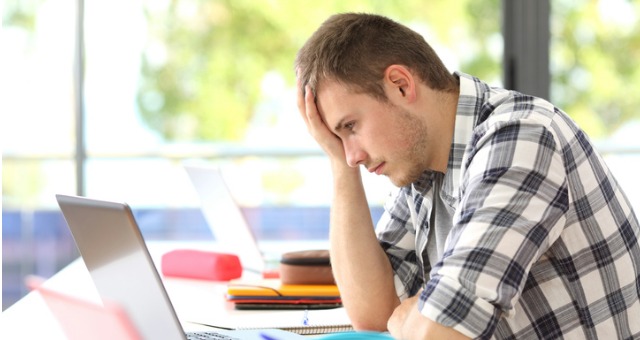 Students are stressed. A recent survey revealed that mental health issues, including severe stress, are on the rise. In 2016, 65% of students reported experiencing overwhelming anxiety during the previous 12 months, which is an increase of more than 7% from the 2013 data (National College Health Assessment, 2016). We also know from decades of research that arousal levels are strongly related to performance: not enough arousal and you don’t perform well, but too much arousal (which becomes stress/anxiety) and your performance is negatively impacted (Colman, 2001). Therefore, anything we can do as instructors to reduce students’ stress should have a positive impact on their mental health and academic performance.

How can we help students, and, perhaps more importantly, how can students learn to help themselves reduce their stress levels? In this article, we outline specific interventions to help reduce student stress, especially as it relates to testing.

Flexibility. Another way that instructors can reduce test anxiety is to allow students some flexibility for when “life happens”. If students are allowed to drop one test or one assignment in the course, they will have less anxiety if they are unable to study, lose their assignment, get a flat tire on their way to a test, or experience a particularly challenging week. Likewise, if they have done well on all tests and assignments, they could have the option to not take the final test, giving them more time to focus on their other courses, and consequently reducing their stress during that extremely stressful time.

Immediate Feedback Assessment Technique. An alternate to traditional multiple-choice tests is a unique tool developed by Epstein Education (epsteineducation.com) which combines a traditional-looking scantron form and a lottery scratch-off ticket. This tool provides students with immediate feedback on their performance and allows them to earn partial credit if they can subsequently answer the question correctly. Battista and Gosse (2006) report that most students really enjoyed this format of testing and that, for most students, it reduced their test anxiety. Of importance to note is that, unlike a scantron, this must be hand-scored.

Meditation. Leading students through a quick breathing or relaxation exercise or meditation immediately before the test can also be beneficial for their stress level (Oman, Shapiro, Thoresen, Plante & Flinders, 2008). Depending on your level of familiarity with these techniques, you may choose to use one of the many freely-available YouTube videos or lead students through a live session. Note also that students can engage in these practices on their own, as well.

Student stress also can be reduced by students’ own practices. Faculty can support these initiatives by sharing the information with their students or guiding them to appropriate resources. In addition to being less time-consuming for instructors to implement than the suggestions identified in the previous section, helping students develop the tools to reduce their own stress may have an additional benefit: students may feel empowered, especially since these skills should be transferrable to other areas of their lives.

Planning and metacognition. Recently, Chen, Chavez, Ong, and Gunderson (2017) showed that students who took a self-administered metacognitive intervention had higher marks (by about 4%) and significantly lower negative affect (an aggregate construct which included stress and anxiety) compared to a control group. The intervention asked students to reflect on the upcoming test format, decide which class resources to use to prepare (practice tests, textbook reading, peer discussions, etc.), reflect how these resources will be useful in preparing for their test, and make a concrete plan on how to use these materials. A key feature of this intervention was to have students reflect and make a specific plan as this is more likely to translate into actual goal-directed behaviour (Gollwitzer, 1999).

Test-taking strategies. Students can also build their repertoire of test-taking strategies to help them feel less stressed when writing a test. For example, most schools offer workshops on taking multiple-choice tests, sharing strategies such as skipping a question when unsure of the answer and coming back to it later (with the awareness that a future question may serve as a prime for them to retrieve the correct response).

Scholarly success depends on a combination of cognitive, physical, and emotional factors. Given the rise in the mental health issues among students, as well as their academic and non-academic stress, actively engaging students in ways to reduce stress can be helpful to their success. Whether instructor-led or student initiated, more of an effort should be made by all parties to reduce student stress levels.

Kennette L. N. & Penn, A. (in press). Exploring the benefits of two-stage collaborative exams, Currents in Teaching and Learning.

Myatt, B. (2016). Applying the Principles of Positive Psychology to the Post-Secondary Classroom. Presented at IPEN Festival of Positive Education, Dallas, TX.

Myatt, B. & Kennette, L. N. (2017, January 9). Towards a positive “U”. Faculty Focus. http://www.facultyfocus.com/articles/effective-classroom-management/towards-positive-u/

Dr. Lynne N. Kennette is a professor of psychology and the program coordinator for the General Arts and Science program at Durham College in Oshawa, Ontario, Canada.

Julie Daigle is a Master of Arts candidate in the counselling and psychotherapy program at Saint Paul University in Ottawa, Ontario, Canada.