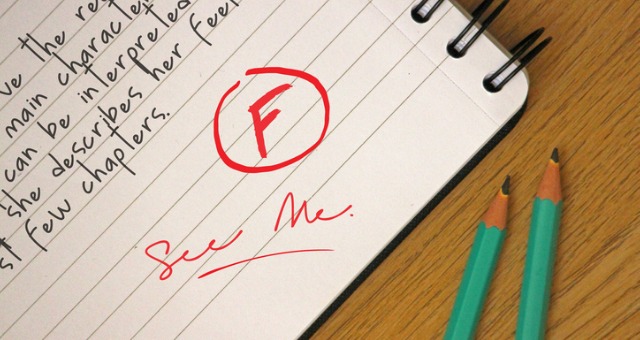 How often does anyone write about being blessed by a policy seemingly rooted in chaos theory? If you were looking, here it is. The academic freedom to evolve a philosophy of grading, thanks to tradition and the American Association of University Professors (AAUP) encouragement of which, “The assessment of student academic performance…is a direct corollary of the instructor’s ‘freedom in the classroom…,’” provides a path of exploration regarding what, why, and how I grade.

This journey began during my own student days. Testing presumably measured what I was supposed to know; and even if it might seem “unfair,” a final grade was a set-in-stone, instructor assessment reflecting subject mastery.

With years gone by and a perspective change from facing the front of the room to taking in all of the desks in their rows, my teaching task became how to figure out what facts I wanted students to know and then build a grading program to measure, by semester’s end, what of that they knew. Most students seemed to agree that to parrot back information was the purpose of our get togethers, but a few came forward with pleadings that effort, as they defined it, should count as much or, sometimes count more than fluency in the subject.

My set-in-stone grading thoughts now faced two immediate challenges. The first was realizing the grades for my class were also based on what students had or hadn’t learned from previous instructors as preparation, meaning I wasn’t just grading student knowledge of what I taught but years of student education, which wasn’t a reflection of what took place in my classroom. The second was that if I didn’t pay attention to effort, I was probably going to be limiting its exertion, at least by some of my students. Also, I began with a teaching philosophy that it was my job to offer materials, but college students were adults, and it was not my place to pick and prod them into learning, but it was their choice to pick whether and what they wanted to learn from the educational sampler platter I laid out.

Reflecting on my experience with grades raised other issues. First was an inability to recall the specifics of the learning upon which I was assessed. Eighty-eight percent mastery? Also, my undergraduate and graduate school meander included a public community college, two small private colleges, a large research university, and a large public university that defined the constitution of an A differently and based on varying degrees of “mastery.” Finally, with all the tension developed within academia over grades, why had nobody outside it ever asked for my GPA?

If grading doesn’t necessarily accurately measure or lead to learning, and, really not that many people care what you got when they need to know what you can do, then to steal from the wisdom of Humpty Dumpty, grades, letters or numbers only mean what an individual instructor chooses them to mean…neither more nor less. Or they mean what the professor thinks the department or administration mean, which is where AAUP defined freedom comes in so handily.

If I am allowed almost any measures, what do I want grades to mean, or more importantly, what do I want grades to accomplish in my class. Sometimes, it feels as if only a few students seem passionate about the subject. Perhaps my job is not really teacher, but learning coach, motivating students to sample from the educational platter offered but leaving them the choice of what they should return to try again (and perhaps even again). As a motivator, I need to recognize that some students seem to work for my approval. Others make clear they are only in it for the grade. And there are always a few students who seem to give no thought at all as to why they are handing in assignments, just floating through my classroom and the remaining few semesters to get to the “real world.” I am not going to achieve a perfect grading system—for everyone in or out of my class—but perhaps I can figure out something most of my students can use, as much as possible, from my class forward to the rest of their lives.

My current grading philosophy is based on my assumption that most students will participate in my class beholden to the mythology that their GPA is the grail they seek. Rather than argue or act that grades do not necessarily accurately reflect knowledge or potential beyond grade 16 (their launch out of college), I sprinkle grades like breadcrumbs throughout the class trying to keep students applying ideas behind the facts we discuss.

I refused to assign extra credit when I began teaching, based on experience of students becoming focused on extra credit instead of doing the work outlined on the syllabus, or taking time from studying what was up next in order to try and mitigate the pain of what wasn’t done before. Now, I offer extra credit—some of which is outlined in the syllabus—on high stakes assignments for preparation done outside of class (e.g., visits with a librarian to discuss research for a paper, outside work on grammar basics, or a reflection after completion of an assignment on how to better prepare for the next one).

Also, I used to use a proportion of the final grade based on “participation” as a way to move students up the curve and would apply this particular rubric with more of a magic wand touch than heavy-handed application. The goal, again, was to offer credits they were likely to earn before, but in a way that motivated specific behaviors. I am continuing to clarify the rubric for participation—now offering credits for screen time and chat postings. Beginning next semester, not only will I occasionally remind the class of this part of their grade, but I’ll also remind them of how easy this credit is to earn, and around the midterm, I will send out a report on how well they are doing.

Additionally, I assign reading and writing due the first class to take advantage of pre-semester student willingness. The lure of points is used with weekly, low-stakes assignments reflecting on what they have learned or by putting class materials to use. I’ve lowered the final grade percentages for high-stakes assignments, such as exams and research papers, to make sure they are focused on the semester’s big ticket items as well.

The result of all of this probably does not look much different to the registrar. I have a fair number of As, most students are in the B range, and the rest are in the C or below range.

All of the work and constant reassessment seems to be saving me time, and there seems to be improved responses to assignments and reduced agony as I try to make sure I am being “fair” with final grades. If giving me more of what I want can be used as a measure, then perhaps this is also working better for student learning, although, admittedly, actual impact measured empirically against previous cohorts probably can’t be known for at least a generation, if even then.

It is true I have freedom to follow this particular path because of the courses I teach: I wouldn’t want a surgeon to emerge from a chaos theory of medicinary education and operate on me. Don’t cut into me if you haven’t gained specific knowledge in biology and chemistry no matter what you gained regarding the philosophical aspects of those courses! But, I’m in the humanities, and I can feel comfort about letting chaos guide my grading. I may never get to a system that works for everyone, but for the time being, I am pleased with the feeling there is incremental improvement in building a system that works for more students.

Kent Oswald received an MA from Manhattanville College in teaching and is pursuing a second MA at The City University of New York in American studies. He teaches communication courses (business writing, media studies) at CUNY. Additional information at kentoswald.com.