Gimme an A! Confronting Presuppositions about Grading 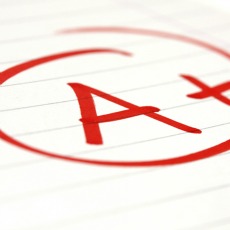 Sometimes, in informal conversations with colleagues, I hear a statement like this, “Yeah, not a great semester, I doled out a lot of C’s.” I wonder, did this professor create learning goals that were unobtainable by most of the class or did this professor lack the skills to facilitate learning? I present this provocative lead-in as an invitation to reflect upon our presuppositions regarding grading.

Most of us hold deeply rooted presuppositions about grading that have rarely been confronted, and this makes sense. We became specialists in our fields without having learned a variety of grading strategies, purposes, and theories. We never had to interrogate our presuppositions about grading nor have our institutions supported us doing so. At our college, for example, we have a grading percentage chart, suggesting a range of grades might be used for a class, and a line that appears on all official course outlines stating, “Evaluation and assignment of grades will be based upon the quality of work produced relative to the objectives of the course.” This, of course, is vague enough to confound students and to allow the use of just about any grading strategy.

I began confronting my own grading presuppositions with a somewhat radical idea that I’ve now tested over three semesters, with the full approval of our Dean. During the first class of an upper-level course, I go over the course outline and grading rubric with the students. Afterward, I ask them if they will do all the work. They usually give me perplexed looks while agreeing. In response, I inform them that they will each receive an A for their final course grade. Some students loudly proclaim, for the sake of peer witnesses, they are writing it down.

In undertaking this pilot-project, basically a form of contract grading, I was required to deeply reconsider the way I understand student attainment of outcomes and my role in their meeting such outcomes. In each class that I have tried this approach, I have observed that students’ attendance, energy, intrinsic motivation, and level of work are equal to or higher than that of classes where I have used typical grading strategies. (I have had less luck with contract grading variants at lower levels.) Students are quick to provide feedback. They state, in ongoing feedback forms and in their end-of-year course evaluations, that the lack of stress regarding grades and not having to figure out ways to please the teacher really allowed them to engage, express themselves, immerse themselves in complex material without always worrying about the correct answer, and, most importantly, to learn.

This pilot-project makes some of my colleagues uncomfortable. They suggest that an average grade, a C, is good and they speak of grade inflation. Or they say I have the luxury of this project because I teach in the humanities field and this grading strategy can never work for the hard sciences. There is lots of room for discussion. The main point of objection is to bring up the hypothetical student who won’t do the work. So far, there has been no such student in these classes. If there were, I would intervene early and often, and if that failed, the contract is based upon the student’s agreeing to do the work.

Generally the arguments against giving all students an A seems to stem from a main presupposition: that all students cannot succeed at a high level, that the purpose of grading is a process of selection. The idea, when pressed, seems to be both vague and deeply held and is usually exposed by phrases like, “That’s just the way it is,” or, “All students do not have equal abilities.” The philosopher R.G. Collingwood would call this an absolute presupposition of which he wrote, “people are apt to be ticklish in their absolute presuppositions” meaning they don’t enjoy being confronted about them. Imagine if teachers were called into the Dean’s office and the conversation went something like this: The fact that many of your students are only reaching an average level of work and comprehension is a reflection of your ability to facilitate learning — what can we do to improve it? (I told you at the beginning of the article that I would be provocative.)

I am suggesting that, regardless of whether one agrees with my position or not, we all hold presuppositions about grading that affect the way we use grading to support learning. If our job is to deliver content, facilitate learning, to scaffold difficult material, and to assist all students in achieving the outcomes of our courses, then from my point of view something is wrong with what we are doing if most of our students are not achieving the top levels of comprehension. I think it’s worth thinking about, deeply.

Christopher Willard teaches at the Alberta College of Art + Design. He is currently working on his PhD in Educational Research at the University of Calgary.