What’s Going on Behind the Blank Stare? 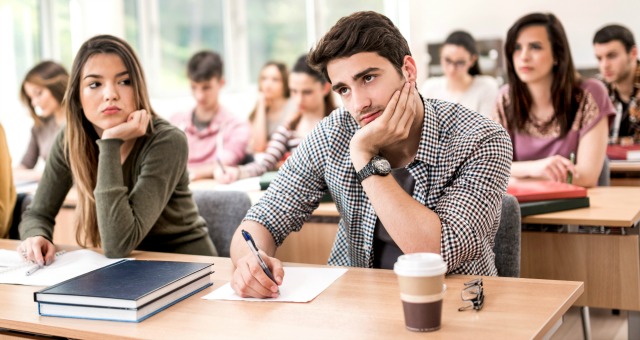 Regardless of our subject area, we’ve all had moments where some students appear to hang on every word, gobbling up our messages, images, graphs, and visuals with robust engagement. Within those very same classes, however, there will be a degree of confusion, perplexed looks, or at worst, the blank stare! In my field of anatomical education, like many other STEMM* disciplines, the almost ubiquitous use of multimedia and other increasingly complex computer visualizations is an important piece of our pedagogic tool kit for the classroom, small group, or even the one-on-one graduate-level chalk talk. Although a picture indeed does say a thousand words, the words that each person hears, or more importantly, comprehends, will vary widely.

My lab, the Corps for Research of Instructional and Perceptual Technologies (CRIPT Lab), uses the experimental paradigm of spatial ability to explore how individuals use images to learn. Each of us has varying degrees of spatial orientation, sense of direction, and ability to mentally manipulate objects or spatial ability. This trait can be measured using a variety of tests that indicate our prowess. It is thought that spatial ability influences our educational choices and even how well we do in those subjects (Wai, Lubinski, and Benbow 2009). We use the cognitive theory of multimedia learning (Mayer) and the cognitive load theory (Valcke 2002) to suggest persons with lower spatial ability undergo higher extraneous learning loads as they scramble to keep up with complex visualizations that are sometimes utilized to demonstrate phenomenon. We have commenced collecting neurophysiological data during learning and testing. Rest assured; these are not a catch-all tests of intelligence, but they do have reasonable and growing predictive applicability.

Education doctoral student Jay Loftus studied how cerebral blood flow is elevated in persons with high spatial ability compared to low spatial ability when using static pictures to learn bones of the feet or large vessels in the chest. The goal wasn’t to learn their names or functions, but rather to understand how these anatomical parts fit together.

Consistently, persons with high spatial ability score better on tests he devised, and they did so with higher cerebral blood flow. For incorrect answers, higher spatial-ability persons had a slight fall in blood flow, but lower spatial-ability persons’ blood flow fell below their baseline, indicating a potential shunting of blood to other areas of the brain in an attempt to answer the question. We tend to think of this as a higher cerebral “work rate” to get the job done. In a sense, low spatial–ability persons are experiencing higher extraneous cognitive loads in this learning and testing modality (Loftus, Jacobsen, and Wilson 2016). Loftus is currently studying these effects using dynamic images, common to many multimedia environments, and the effect seems exacerbated further.

We can alter student cognitive loads in a variety of ways through good, bad, or ugly demonstrations.

We wanted to probe deeper to better understand whether spatial ability is “all in the head.” We took it a step further to see whether people of varying spatial abilities examine visualizations in the same fashion. Doctoral student Victoria Roach incorporated eye tracking technology to address her questions. Eye tracking uses high-speed cameras to observe where the eye moves while observing a screen. With this technology, she measured the where and when—related events as they pertain to examining a visual. From a visual and cognitive perspective, we as humans process visual information only when we fixate on things in our visual world. So Roach developed a measure of salience (“where” combined with “when”) within each image. She monitored persons while they undertook tests of mental rotation. Thus, at the end of the experiment she knew their mental rotation score, or how well they had done on the test, as well as their attention salience during the test. Interesting results have begun to emerge from her experiments. First is that high and low spatial-ability persons pay attention to different parts of the same presented image. That is interesting in itself, but consider that where one looks within the picture may impart clues to better orient and deduce meaning.

Going a step further, we often place time limits on our tests, and in doing so, we separate further the high from the low spatial-ability learners, giving them less time to concentrate on the important aspects and thus stymieing lower spatially able learners. Give people more time to complete the tests, and we find the obvious: scores tend to increase across the board. More importantly, though, lower spatially able persons start to pay attention to similar salient pieces of the visualization as their higher spatial-ability counterparts (Roach et al. 2016). In her yet-to-be-published research, Roach has gone as far as defining the most salient area of an image from a group of highly spatially able persons; she then shows this salient area to low spatial–ability persons, saying only that it’s an important place in the picture. The coached low spatial–ability persons increase their score considerably, equivalent to raising a grade point average, and the effect is enduring as they continue to do better on subsequent “noncoached” tests.

Putting this research together is empowering for teachers and students. First, we need to realize that we as educators can alter student cognitive loads in a variety of ways through good, bad, or ugly demonstrations. If we inadvertently increase the extraneous cognitive load of a diagram, graph, or visual, the effects are widespread and differential across our learners, and those with lower spatial abilities suffer the most. Is spatial ability a dependent variable of your tests? Now imagine what happens in a testing situation where time limits are short and stakes are high. Finally, there is immense power in pedagogy and our ability as educators to lead students to understanding complex visualizations. If we direct attention, show students where and how to look at a phenomenon, the divide between spatial ability at least is shortened, and our learners can concentrate on the message (knowledge) rather than the visualization (medium).

* STEMM is often referred to as disciplines involving science, technology, engineering, and math, and we often include medicine to represent allied health science fields.

Dr. Tim Wilson is an associate professor at the University of Western Ontario. He also serves on the advisory board of the Teaching with Technology Conference.