Step Away from the Lectern 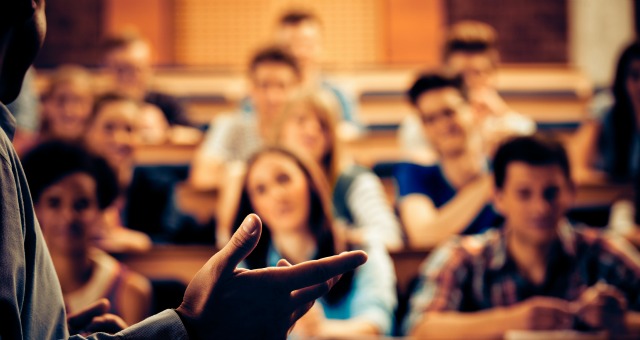 A quote from my June 3 blog post appeared in the October 18 issue of the New York Times. I was thrilled until I read the beautifully written op-ed piece. It proposes more lecture and less active learning. My quote was used to illustrate the perspective of those of us who favor active learning.

The author, a history prof, describes the various technology accoutrements found in her classroom, but she quests for what wasn’t present—“a simple wooden lectern to hold my lecture notes.” I loved this response from a community college faculty member: “Had I known Professor Worthen needed a lectern, I would have been happy to send one from the small community college in northern Wyoming where I teach English. After 20 years of teaching, … it [lecture] is a form I have largely abandoned.”

Lecterns come in various sizes and shapes, from small, moveable, tabletop models to large, stately edifices that are all but immoveable. They house our notes (and keyboards, now) so that they are readily accessible. But is that their only purpose? I took a grad course where the prof placed a moveable lectern at the head of the seminar table (there were 12 of us in the course) from which he facilitated an exchange that was mostly lecture. When it was going well, he’d venture out and stand alongside the podium, still holding onto it with one hand. When he moved to that position, we (yes, that includes me) asked questions that challenged his perspective or suggested another interpretation. Our goal (regularly achieved) was not to advance the discussion but to move him back behind the podium. It’s not an action I’m particularly proud of, but it does illustrate that lecterns play a role in communicating messages unrelated to content.

How professors use their space in the classroom is worth exploring. Contrast the teacher ensconced behind a podium with one who owns the space in the room. By owning the space I mean occupying it and feeling comfortable in various locations. When a student speaks, the teacher walks in that direction. When a student nods off or starts texting, the teacher may move nearby. Different points are delivered from different positions. That movement creates a sense of energy and enthusiasm, as well as some vulnerability.

But still it’s only the teacher who’s energetic. In many (is it still most?) classrooms, students sit in rows, in small, usually uncomfortable chairs with tablet arms. In lots of classrooms those chairs are fixed, attached to the floor, forever facing the front of the room, where the lectern or large lab table defines the teacher space in much more imposing terms than what’s defined by the students’ chairs.

I had a student who on occasion would sit on the table in the front of the room before class started. I unpacked and set up around him, chatting about the weather, his classes, our class, etc. “You know the classroom looks so different from up here,” he observed, “You can see everything. Does it make you feel powerful?” “Some days,” I said. “It can also feel frightening and lonely.”

With the lectern, it’s about learning from the teacher. Having all or most of the content coming from behind the lectern doesn’t convey the sense of learning as a multidimensional experience, something bigger, bolder, and with potentially larger impacts. Those holding tightly to the lectern want students learning from the expert. Those of us who’ve let it go want that and more. The question is how we get learners to recognize and make use of the teacher’s expertise. Those of us who shake up the classroom with active learning see value in teacher and student activity. We’re committed to students asking questions, attempting explanations, and testing ideas. We want them doing the hard, messy work of learning while we’re there to help, support, and yes, correct. We don’t feel that our expertise is eroded when teaching and learning happen elsewhere in the classroom. Rather, this dynamic fills the learning space (physical or virtual) with more promise and possibility than we can provide on our own.

Whether the decision is to stand behind the lectern, alongside, or without it, we need to recognize that a podium is much more than a placeholder for notes.