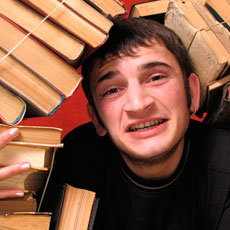 In more than 20 years of teaching, I have learned that too much information frustrates rather than inspires students. Today, however, with a few clicks of the computer mouse, any teacher can retrieve an overabundance of information. What is more, courseware makes distributing this information to students amazingly easy. As a result, teachers risk (unintentionally) giving students much more information than they can reasonably digest, including electronic texts, supplementary texts, and background information. The key to avoiding information overload is remembering course goals.

A few years ago, the program in which I teach revamped its two courses. Consequently, I ended up having to teach a number of texts I had never taught before. As I prepared to teach these new texts, I confronted this question: how much background information do I need to provide for students so that they will have sufficient context to analyze and discuss these works effectively?

My program is interdisciplinary: the courses do not focus on a single author, era, or theme. Rather, the focus is on critical reading skills, and the texts themselves—from disciplines as varied as biology, literature, urban planning, and more—pose disparate critical challenges for readers. Thus, each text essentially requires its own background information—an overview of its author, its historical setting, its relationship to other works, etc. Those of us who teach in this program have nine texts of varying length to cover in each of the two courses, so one can see how a teacher could spend a considerable amount of time supplying background information to the detriment of skills development. Indeed, this is the essential point: the program’s focus is not biology or literature or urban planning but skills development. Having taught the new courses numerous times now, I have come to realize that if a teacher keeps this course goal in mind, he or she can use experience in the classroom to discern how much background information a given text requires in order for students to achieve the intended outcome.

I recently found myself thinking again about background information when my program adopted a new text, Jean-Jacques Rousseau’s Discourse on Inequality, and I was asked to pilot the book in a summer session. (I had not taught anything by Rousseau in a dozen or more years.) Once again, the question arose: how much background information would my students need in order to help them analyze and discuss this work effectively? I started by reminding myself of the desired outcome: the goal was not for students to become proficient in Rousseau or Discourse on Inequality—or even to use Rousseau as part of a survey of 18th-century literature. Rather, the objective was for my students to become proficient readers, using parts of Rousseau’s text for close reading exercises in pursuit of that goal. I realized that given the course goal, my students would not require the amount of background information on Rousseau that other courses might require.

If my class were focused on Rousseau and his works or even on 18th-century literature, I would need to assign comprehensive supplementary readings, such as the entry on Rousseau found in the Stanford Encyclopedia of Philosophy and another companion piece or two. In my critical reading course, however, I only needed to prepare a 20-minute lecture on Rousseau, his works, his relationship to the Enlightenment, and his influence on Romantic thought. Indeed, given my program’s desired outcome, it behooves me to spend as much time as possible on passages from actual course texts such as Discourse on Inequality. The key to doing this is to supply just enough background information to help students contextualize the reading.

As accessing information becomes easier and easier, teachers need to practice greater discrimination in terms of the quantity of the supplementary texts and background information supplied to students. Too much information may overwhelm students and detract from the intended outcome.

Dr. John A. Dern received the 2009 Violet B. Ketels Award for his teaching in Temple University’s Intellectual Heritage Program.