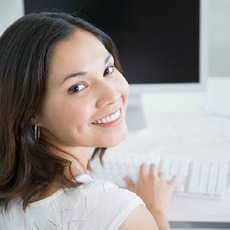 The discussion board in Kathleen Lowney’s large blended (or hybrid) section of introduction to sociology at Valdosta State University wasn’t serving its intended purpose of engaging learners with the content and preparing them for face-to-face class sessions. She tried dividing the students into smaller discussion groups of 50 and then 20, and the results were the same: the weaker students waited until the last minute and essentially repeated what the better students had posted previously. When she replaced the public discussions with private journals, the quality of students’ posts improved, as did their grades.

Lowney’s course is a “supersection” hybrid that has an enrollment of 150 to 300 students and meets Tuesdays and Thursdays with a significant online component. She had one discussion per week that required students to read 50 percent of their classmates’ posts and contribute to the discussion to prepare them for the next class session.

She also observed that students who posted earlier and engaged in original thinking did better on tests. Even in smaller groups the same “free rider” problem occurred, and Lowney had the additional problem of managing multiple discussions. (While Blackboard makes it easy to divide students into groups and present the same discussion prompt, knowing which comment she made in which group proved to be a challenge.)

Lowney now assigns a private prewrite, which asks students to apply concepts. Students do not see each other’s posts, and Lowney responds to each, offering comments that help prepare for the in-class discussion.

She also says that this format has improved students’ engagement with the material. “I wouldn’t say the weaker students are always a lot stronger than they were, but what I’m seeing is that my weaker students’ test scores have made a steady improvement from when I had the open, public discussion,” Lowney says.

In addition to improved test scores, Lowney has observed improved interaction in the face-to-face sessions. “Classes are much more engaging because I know that they’ve had to read the material before and engage with it,” Lowney says. “I’m getting more questions in class because I’m priming the pump with my comments.”

Of course, making these prewrites private eliminates the benefits of writing for and receiving feedback from peers. One way that Lowney addresses this issue is by sharing (anonymously) sample private prewrites in class, highlighting common mistakes and things done well. “I’ll build that into my PowerPoint and say, ‘This is something that cropped up a lot.’ Most students will see their work at some point in one of the PowerPoints, and I’ll share good examples as well, especially early in the semester so that I can model a successful answer and ask students to tear it apart and see what made it successful,” Lowney says.

These private prewrites are more work for the students and the instructor. Responding to each prewrite is quite time-intensive for Lowney, particularly in such high-enrollment courses. And one of the challenges is providing feedback to students before the in-class discussion. “If you’re not able to get them all graded, you can get a sample graded so you can use them in the lecture the next day. This makes it seem as though it’s not just busywork,” Lowney says.

To help motivate students to take these prewrites seriously, Lowney shares with them data that shows how grades have improved since she began using this approach.

Each module still has an open discussion where students can post messages or ask questions, but students rarely use it. While this is not really an issue in a hybrid course where students have opportunities for face-to-face interaction with peers, it would be an issue in a fully online course. That said, Lowney does see the potential for limited use of this technique in totally online courses. “If I were going to have two assignments a week, I’d have one private and one open, because I do think there needs to be some community in an online course that an open discussion allows for,” she says.

Lowney has not tried this approach in upper-division courses, but she speculates that she might take more of a backseat role in these discussions. She sees the merit of including open discussions in introductory courses, perhaps with more private interaction in upper-level courses. “It depends on what you’re teaching. What are your goals? What’s the rest of the course like? What are your other assignments?” Lowney says.