Why Change Our Approach to Teaching? 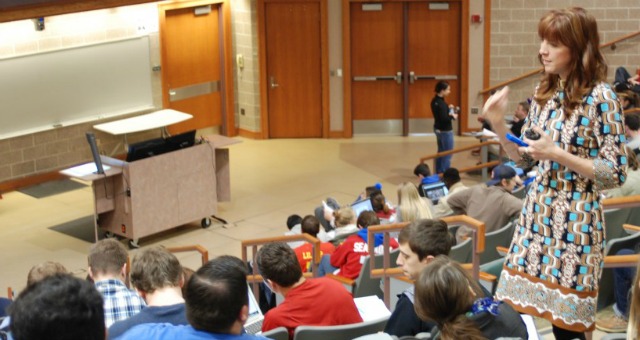 Jennifer Roberts first noticed the difference a few years ago in Geology 101.

The course regularly draws 300 or more students a semester, and Roberts, an associate professor of geology, was teaching in much the same way she had since she took over the course in 2002: lecture and exam.

Problem was, exam scores were dropping, she said, and as she interacted with students, she found that they had less understanding of the material than students had had just two or three years before.

So Roberts set out to transform the class, which is now called The Way the Earth Works, into an active learning format, with in-class group work, student presentations, clicker questions aimed at prompting discussions, and lots of interactions with students. With the help of Kelsey Bitting, a postdoctoral teaching fellow, she began moving away from what Bitting calls the “fire-hose approach” to teaching and concentrating on helping students learn core skills through hands-on activities.

Research has long cast doubt on the use of lecture in education. Donald Bligh, in his book What’s the Use of Lecture?, provides some of the most compelling evidence, reviewing more than 200 college-level courses in several disciplines. The biggest benefit of lecture is that it is an efficient means of reaching a large number of students in a single setting. Bligh argues that lectures can be useful in conveying information but that they do little to promote thought or problem-solving abilities, or to change behavior. Rather, they reinforce ideas, values, and habits that students have already accepted.

Despite the evidence about lecture’s weaknesses, two-thirds to three-quarters of faculty members continue to rely it, according to research summarized by Derek Bok of Harvard in his book Our Underachieving Colleges. As Bok argues, though, facts, theories, and concepts delivered in lecture have little value unless students can apply them to new situations, ask pertinent questions, make reasoned judgments, and arrive at meaningful conclusions.

Students like clear, firm solutions to academic problems, and pushing them to think beyond a single “right answer” takes work.

Bitting urges instructors to think about it this way: “You may have a lecture that works to get students to take a multiple choice test really effectively,” she said. “But when you have a conversation with that student after your semester, they may not actually remember anything. Or they may not know how to make sense of it outside of the context of the little paragraph in the textbook where they read it the first time.”

Transforming a class, especially a large lecture class, isn’t easy. Roberts has essentially applied the scientific method to her teaching of Geology 101, experimenting with a variety of techniques. Some have failed; others have succeeded. “There has been a lot struggle but also self-reflection on my process and then on the learning process in general,” she said.

Roberts said her experience with active learning in a large class had forced her to step away from the class material and recognize that students “are not me.”

“They don’t learn like I do,” she said. “And that’s OK. But my job is to have them learn, so I need to think about what’s the best to have everybody do the best they can and to learn.”

The adjustments in an active learning class can be difficult for students, as well. As Catherine Sloan writes in Change magazine, millennials “have a deep fear of failure,” so getting them to take intellectual risks takes patience. Nor do they deal well with ambiguity. They like clear, firm solutions to academic problems, and pushing them to think beyond a single “right answer” also takes work from instructors.

Tradition has also made changing the format of classes more challenging. Students have grown accustomed to sitting passively in lectures, reviewing instructors’ notes or slides posted online, attending study sessions (again, passively), cramming for exams, and moving on. Many resent having to take an active role in class—isn’t that the professor’s job?—and in their learning in general.

“Even if your lecture is working really well for getting your students to take a multiple choice test, if they’re not excited about it and they don’t care about it when they leave, maybe you’re not doing the job you want to do,” she said.

Doug Ward is an associate professor of journalism and the associate director of the Center for Teaching Excellence. You can follow him on Twitter @kuediting.

This article originally appeared in Teaching Matters, the blog for the University of Kansas, Center for Teaching Excellence. Reprinted with permission.