When Students Lead the Discussion 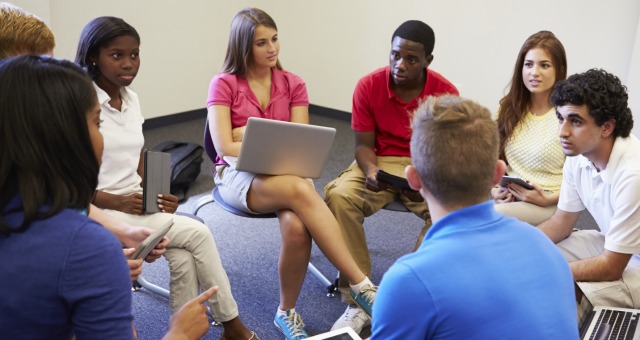 A few years ago, my colleague Brenda Whitney spoke at a workshop about how class discussion can take on many different forms, each with its own style and descriptive moniker. Paraphrasing and borrowing language from her handout, with a few revisions of my own, these discussion styles include:

A teacher at the seminar, Sam Hamilton, added another one: the Wild West Train, where the conductor must get his precious cargo to the train station, despite efforts by bandits to derail and rob the train.

And if I might add one to the list, I’ve noticed that this quarter my class has become a Spoked Wheel: each student is a spoke, each spoke never touches the others, and my job as the hub is to connect the spokes. This is my doing, an effort to move away from the Eclectic Beaded Necklace (which I easily fall into) toward a conversation where each contribution connects to the others. But I now want to find an alternative to the Spoked Wheel, a way for students to talk to each other, to not rely on me to hold together our conversations. I’d rather the class discussion be a Construction Crew Without a Foreman, that is, a crew that works toward a goal, together building something that each member could not have built individually—but they do this on their own, without oversight.

We had just read Gloria Anzaldúa’s “How to Tame a Wild Tongue.” I asked the students to circle up, get out the Anzaldúa essay, and then to do a bit of writing. First, they had to go to a passage they found provocative and write a paragraph about what draws them to that specific part of the essay. Second, they had to write three discussion questions based on the passage and their response to it. After 10 minutes of writing, I told the class we had 15 passages with 15 responses and 45 possible discussion questions. That’s a lot of material. So, I said I would not be talking for the next 10 minutes. I explained that the class would run the discussion, and I would grab my notebook and pencil, take a seat in the circle, and listen. Which is exactly what I did.

The students looked at each other and back at me. Narelle was the first to speak. “What do you think Anzaldúa means by copping out?” The class was confused. They did not have a context for Narelle’s question, a passage to work with, or a sense of what prompted the question. Narelle picked up on this. She elaborated, mentioning the part of the essay that provoked her question and explaining why she thinks the question matters. Still, the class needed more. “What page are you on?” Molly asked. Narelle responded. Gabrielle asked, “Can you read us the passage?”

This—two minutes into my silent period—was the pivotal moment in the discussion. The class began to do the work I normally do, setting up the context for a discussion question, pointing us toward the text and reading from it. Zaq offered an answer to Narelle, a response Jillian then paraphrased: “So, you’re saying that …” Ten minutes into the discussion (the point I had said I would start speaking) I was hearing phrases like “To go back to your question …” and “Going back to what Max said, that connects to what Narelle asked.” The students were synthesizing their comments. When Laura said, “I agree, because when I lived in Italy…,” she was making a “yes, and …” move, placing her own story against and among the comments from her classmates and then building upon what they’d said. Even though I had follow-up questions to ask, even though I wanted to comment on—and correct—a few things they’d said, even though I wanted to press against how they were reading Anzaldúa, I stayed silent. It would have been foolish to interrupt.

Remaining silent
Twenty minutes in, Ella voiced resistance to Anzaldúa: “I have a problem with this essay. It makes me mad.” Max elaborated: “The part that bothered me was” and here, he went to the text, reading aloud for his classmates. They’d moved from questions clarifying Anzaldúa’s claims to synthesis to now, late in the conversation, their responses to the essay. This surprised me. I expected them to begin with their responses and take their time getting into the argument itself. They did the inverse, making their way through Anzaldúa’s essay while incorporating comments from across the classroom, reading aloud from the text, paying close attention to the way Anzaldúa’s words fall on the page, the conversation building to Ethiopia’s question, a question I was going to ask had I led the discussion: “If you have multiple languages, how do you know what you really are?”

But questions linger. That the students talked so well on their own, that they did not need me to salvage the discussion, that I was not the hub holding together the conversation, has me wondering when I should speak in class and when I should remain silent. I think about how often I could attempt the teacher-less discussion and what pedagogical purpose it might serve at various points in the course. I think, too, about what teacher-less teaching might look like in other contexts—a teacher-less essay assignment, a teacher-less reading list, a teacher-less syllabus—and what preparation would need to happen to make these teacher-less efforts both pedagogically sound and productive. And I think most about the teacher-student relationship, about how much of a presence I should have in my students’ learning, and at what point (and how) I should step back, giving them space to work, to read and write, to stumble and fail and succeed on their own. My silence that afternoon leaves me uncertain what teaching looks like—which is a good place for a teacher to be.

Peter Wayne Moe is an assistant professor of English and the director of the Writing Program at Seattle Pacific University.

Whitney, Brenda. “Types of Discussion.” Teaching Workshop by the Committee for the Evaluation and Advancement of Teaching. The University of Pittsburgh, Pittsburgh, PA. Sept. 19, 2013.