The Elusive Benefits of Study Groups 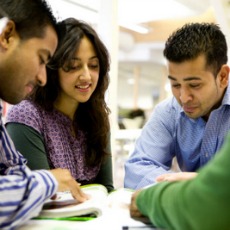 Faculty often recommend study groups to students, especially in large courses or in courses where students typically struggle with the material. “You’ll do better on exams in this course if you work together with some other students.” Beyond these verbal recommendations or some description of the benefits of study groups in the syllabus, most faculty leave the formation and activities of study groups entirely up to students.

Does participation in study groups formed this way make a difference in exam scores? Not according to a study of students in three sections of a 700-student, four-credit lecture and lab introductory biology course. Researchers had predicted that students who participated in study groups would score higher on exams in the course, but they did not. Their scores were not lower, but participating in a study group did not improve exam scores or scores on a pre- and post-content exam.

The question is why, and some possible answers can be found in survey response data. Students were encouraged to complete four different online surveys that contained both closed and open-ended questions covering topics that included previous experience in study groups, what motivated students to participate in study group, what activities were completed in these groups, what problems emerged in, and what benefits they gained from the study group experience.

Only 14 percent of the students in this course participated in a study group throughout the entire semester. Almost 55 percent reported that they had never participated in a study group in any course. Those who had never participated in study groups or didn’t in this course offered a variety of reasons why they chose not to. Included among the reasons were the failure of participants in study groups to contribute equally (various versions of members not carrying their weight and not being reliable), the lack of productivity in the study groups accompanied by the sense that it is just more efficient to study on your own, the perception that study groups are easily distracted and lack focus (someone starts talking about something else and the group stops studying), and logistical problems primarily associated with finding convenient times and places to meet.

Of the students who participated in study groups preparing for the first exam in this class, 85 percent believed being in the group helped their grade. Among the benefits regularly reported on the surveys were how study groups offered members help and clarification. The groups were a place where students could get questions answered. There was also what the researchers called the “benefit of social learning.” Students understood that it was helpful to them to explain material to other students and that listening to others talk about the content helped them understand it better.

The research on group work of various sorts confirms that groups can offer students powerful learning experiences. What this analysis shows is that students (could we add faculty?) aren’t born knowing how to work in groups, in this case how to study collectively. And without a basic understanding of small-group dynamics, it is unlikely that those in groups will accrue the potential benefits of collaboration. In fact the opposite happens regularly. We see students whose previous experience in groups has convinced them that it is better to work alone than together.

The findings of this study are not surprising. Most of us have seen students attempting to study together. They argue about whether the test will be hard or easy, report what previous students had to say about the exams, and offer advice about guessing on answers. The message to us is that if we are going to recommend study groups to students, we must also offer guidance—whether that’s a handout that lists good study activities and others to avoid, content material that they might work through, or an assignment where the study group prepares review material on a designated topic that they then distribute to the rest of the class.

Editor’s note: This article has an excellent bibliography that includes other research articles on study groups and articles describing various ways study groups can be used in courses.