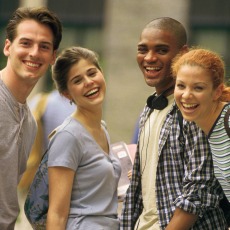 People text almost everywhere nowadays, and so it shouldn’t surprise us that students are doing it in class. In this study of almost 300 marketing majors at two different universities, 98 percent reported that they texted during class. They reported receiving just about as many texts as they sent. Perhaps most troubling in these findings were students’ attitudes about texting. Here’s a sample:

The article contains a literature review with references to many current surveys documenting the use of cell phones and texting during class. The findings of these descriptive studies are succinctly summarized in the table included in the article. In a 2010 survey, 82 percent of a 200-student cohort said they texted in class; in a 2011 survey, 79 percent of an 805-student cohort reported texting in class.

The authors of this article also summon an especially impressive amount of evidence on multitasking. They succinctly and clearly explain the physiological reasons why it is difficult for human brains to do more than one thing at a time and conclude “The problem inherent with multitasking and learning, as expressed by the model [a metacognitive model explained and referenced in the article], is starkly rudimentary. Meaningful learning requires substantial cognitive processing, but the learner’s capacity for cognitive processing is severely limited.” (p. 27) Multitasking hinders mental fluidity, and given that the capacity to process sensory input is innate, multitasking a lot (texting regularly in all one’s classes) does not increase the ability or overcome the negative consequences. If you’d like to explain to your students why the beliefs many of them hold about their ability to multitask are specious, this article is a great resource.

A bit surprisingly, this study did not find a relationship between texting and GPA. In other words, there was no correlation between the amount students reported texting and their overall college GPA (which was not self-reported). However, a positive relationship has been reported in other research, and in this study, the students who received the most texts in the course from which the study cohort was drawn did more poorly in that course. The researchers describe the relationship between texting and grades as complicated. They offer several possible explanations for the lack of relation found in their study.