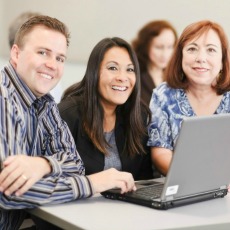 Research on the effectiveness of Peer-Led Team Learning (PLTL) continues to accumulate. In part, the findings are impressive because the method is highly prescribed, which means it’s being used similarly at a variety of institutions, with different student cohorts and in a range of fields, although most of the research on the method has been done in chemistry.

It’s an approach in which peers (students who have taken the course previously and done well) work with small student groups on instructor-created homework problems. Sometimes the peer leaders are paid; sometimes they receive a designated amount of upper-division (mostly elective) course credit. They are trained. They don’t do the problems for students, but, like all good teachers, they ask questions. They ask students to explain how they got answers. They challenge groups to compare and debate answers. They encourage students to look up and find answers for themselves.

In this particular study, involving 21 sections of general chemistry taught via traditional methods and eight sections that incorporated PLTL, students in the PLTL sections used one of three weekly class meetings to work on homework problems in small groups with a peer leader. This is noteworthy because other research on PLTL has been criticized for having students do the PLTL work in addition to time spent in class. In that case it is possible that the positive results were a function of students spending more time on task. Even with students spending the same amount of class time in the control and experimental sections, results were statistically significant in the positive direction. More students took the final (indicating a 15 percent improvement in retention rates) and passed it.

This study was designed and executed by a faculty member who is a prominent researcher in this area, and was designed to answer challenges to previous results. These objectives and the design features that address them are all explained in the article.

This is one of those pedagogical innovations faculty might read about and find impressive but think that it’s not something easily implemented by an individual teacher. And that’s probably a correct conclusion. PLTL approaches are being used in large courses, and they are being implemented with various kinds of institutional, departmental, and colleague support. But what’s being shown by this research supports some very general principles that can be implemented in almost any class. First, in the PLTL setting students are doing the work. They aren’t watching somebody else solve the problems. They aren’t getting the answers or advice on what to do next the moment they get stuck. They are working with the content. Second, they are working with other students. Yes, that means the problem-solving process will be messy (but isn’t messiness an inherent part of most learning?) and they are going to make mistakes, and this approach is more time-consuming. But there are a couple of payoffs. Students are more likely to really understand how to solve a problem, and the process better builds their problem-solving skills.

These design features are replicable in lots of group activities. Students can be given tasks that they must work to complete on their own. There can be enough points, extra credit, or other kinds of rewards to motivate their involvement. They work together with other students. If the groups are small enough (four students per group in this study), the chances of everybody being involved and everybody contributing increase. The instructor can wander around and ask the same sort of questions the peer leader does, or maybe students from previous semesters could be invited to work with groups for one or two sessions, or students can just be encouraged to ask each other questions. Generally, students are more comfortable asking each other than asking the teacher. Obviously, any modification means the results reported in the study aren’t guaranteed, but when there’s lots of evidence that particular approaches work, there’s a pretty good chance that when its basic principles are part of another version, the same or similar positive outcomes will also result.