When Others in the Group Seem Smarter Than You 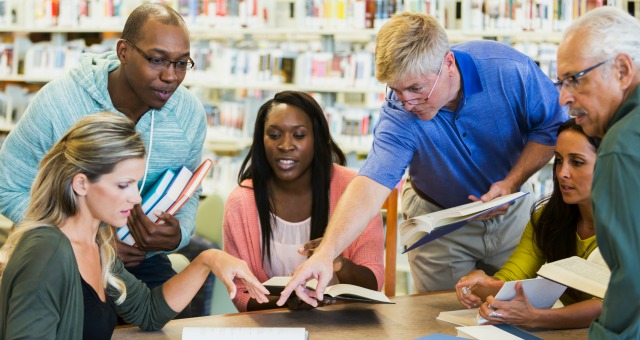 Students who don’t carry their weight in a group continue to be a big concern for faculty who use groups and for students who participate in them. Most often faculty and students assume that these students are lazy and happy that they’ve landed in the group with others willing to do the work. And sometimes that’s the case. Some students are lazy. But research documents that this isn’t true of all students who aren’t participating in groups. Here are a few highlights from a study that considered how social-comparison concerns might prevent participation and approaches that help alleviate those concerns.

“When individuals are faced with others whom they view as more competent at some task, the threat of feeling inferior hinders cognitive engagement, resulting in reduced ability to process information.” (p. 251) If a student is in a group and thinks the rest of the group members are smarter, better prepared, or know more about working in groups, that student is less focused on what’s going on in the group and more concerned about how he or she is likely to look less impressive than everyone else. However, there’s less chance of looking inadequate if you say and/or do nothing.

Students in this study were taking introductory science courses (chemistry and biology) and voluntarily participating in peer-led, small-group study sessions. They met in groups of five to seven for two hours a week and worked on challenging course-related problems. Students with social-comparison concerns were identified via a set of survey items that included statements like “I sometimes leave the workshop feeling like I am the only one who doesn’t understand the material well” and “If I made a mistake in front of others in the group, I would feel embarrassed.” (p. 256) This survey was first administered early in the course.

For students who feel that they are not as intelligent or talented as others in the group, small-group environments might do more harm than good.

The 33 groups studied were divided into thirds, with each group experiencing a different experimental treatment. Treatment A was designed to reduce social-comparison concerns. Students in these groups received handouts about how intelligence was malleable rather than fixed, and they were regularly reminded that many students who feel discouraged and doubt their abilities end up doing well and finding success. Treatment A students participated in an icebreaker activity during which each group member shared an academic challenge he or she had faced. In the middle of the course they watched a video in which students talked about struggling and lacking confidence in an academic program in which they did ultimately succeed. And finally Treatment A students received encouraging email messages from the peer leaders.

In Treatment B the focus was on developing study techniques. These students received handouts that offered study suggestions, they engaged in a more general icebreaker activity, and they received emails from the peer leader that reviewed the week’s material and recommended study strategies. In Treatment C, students met for the required two hours weekly and engaged in the problem-solving activities without receiving any of these additional materials or messages. At the end of the course, all the students responded again to the social-comparisons concerns survey.

The researchers hypothesized that Treatment A would result in reduced social-comparison concerns, and their results confirmed that hypothesis. “The Treatment A group had a significantly lower value of social-comparison concern than the Treatment C group (t=0.013).” (p. 256) The effect size was even larger for students with lower ACT/SAT conversion scores. The researchers call that result “encouraging.” “It is precisely these students who can benefit most from reduced anxiety in the small-group setting.” (p. 258)

They point out that interventions like these are not onerous to implement. They used handout materials, short but frequent discussions during group meetings, and encouraging emails. The presence of a peer group leader made that particularly easy in this case.

“For students who are worried about performing poorly in front of the group, or who feel that they are not as intelligent or talented as others in the group, small-group environments might actually do more harm than good.” (p. 258) The research team also worries that group work is so widely used now that faculty may implement it without recognizing that it impacts the learning experiences of students differently. Students who aren’t participating or who are doing so reluctantly may be lazy, but there’s also the chance that they’re feeling intimidated. With encouragement and support they can be persuaded to join the group effort.