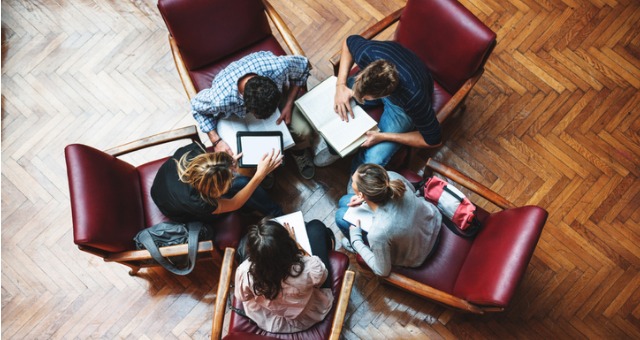 Faculty regularly face the problem of getting the students most in need of help to come to the office for help. Not only do a small number of students take advantage of office hours, typically those who show up are not those who most need to be there. In previous issues we have reported on research that offers some reasons why this happens. When students start getting feedback that they are doing poorly, some begin to doubt their abilities. They conclude that they just don’t have what it takes and so getting help isn’t going to make any difference. Other times, it’s the stress of having to face the professor with their failure. Some students are so lost, they don’t even know what to ask, and their confidence is so shaken, they have trouble processing helpful information when it’s delivered.

Two professors report on their experiences with a reformatted kind of office hours: something they call “course centers.” They scheduled one- or two-hour time blocks in unoccupied classrooms. Students were invited to come individually or in groups, and they could work on whatever they wished during that time. The course instructor and/or TA were available during the time block. If students wanted help, they could ask for assistance. Otherwise the instructor just floated around the room, moving from group to group. Students were free to come and go as they wished during the session.

The professors of these two courses (an introductory physics course and an introductory symbolic logic course) wanted to create an environment in the course centers in which students felt like they were just spending time studying, rather than explicitly getting help; where students felt welcome getting together with other students for a study session; and where they felt no pressure to have a set of questions ready to ask the instructor.

In response to several open-ended queries, students identified those features of the course center they most appreciated. They listed convenience, although it was not clear how or why a course center was more convenient than traditional office hours. They also noted that they could get one-on-one help during the course center sessions. They could get that same kind of help during office hours too, so faculty found this response equally puzzling. Students further reported that they found the opportunity to work in groups useful during the course centers. Not only did they get help from other students, but several noted how reassuring it was to see other students also struggling with the content. And finally students indicated that they like the “laid-back” atmosphere of the course centers. They felt as though the instructor and TAs were more approachable in that context.

The professors conclude with this summary: “Although instructors will need to continue offering traditional office hours, alternative formats such as a course center can do as good or a better job of delivering help and of motivating students to seek that help.” (p. 257)

For more articles on office hours, take a look at these articles from The Teaching Professor:

Reprinted from Office Hours in a Different Format, The Teaching Professor, 20.9 (2006): 6. © Magna Publications. All rights reserved.