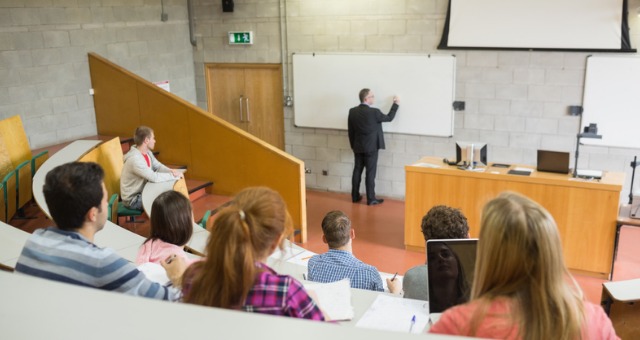 An analysis of more than 2,000 college classes in science, technology, engineering and math has imparted a lesson that might resonate with many students who sat through them: Enough with the lectures, already.

Published March 29 in the journal Science, the largest-ever observational study of undergraduate STEM education monitored nearly 550 faculty as they taught more than 700 courses at 25 institutions across the United States and Canada.

The University of Nebraska-Lincoln’s Marilyne Stains and her colleagues found that 55 percent of STEM classroom interactions consisted mostly of conventional lecturing, a style that prior research has identified as among the least effective at teaching and engaging students.

Another 27 percent featured interactive lectures that had students participating in some group activities or answering multiple-choice questions with handheld clickers. Just 18 percent emphasized a student-centered style heavy on group work and discussions.

The predominance of lecturing observed in the study persists despite many years of federal and state educational agencies advocating for more student-centered learning, the researchers said.

“There is an enormous amount of work that has demonstrated that these (student-centered) strategies improve students’ learning and attitudes toward science,” said Stains, the study’s lead author and associate professor of chemistry at Nebraska. “It’s not just that they understand it better, but they also appreciate science more. They’re not as scared of it, and they engage more easily with it.

“When you see that kind of effect, it makes you say, ‘Why are we still doing it the other way?’”

A breakdown of how teaching styles varied by STEM discipline. (Click to enlarge) 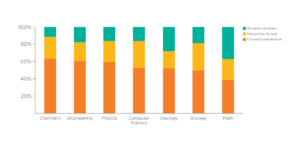 One potential culprit captured by the study: Faculty may lack the training necessary to take advantage of smaller class sizes, open classroom layouts and other strategies meant to reduce the reliance on conventional lecturing. Lectures did occur less often in smaller than larger classes, the study found, and open layouts did correlate with more student-centered learning. But about half of the courses with those advantages still featured more conventional lecturing than interactive or student-centered teaching styles.

“When you talk to faculty, you often hear, ‘I teach in an amphitheater. I could never do group work; it’s just not practical. But if I had a small class, I could do it,’” Stains said. “But just because you have the right layout doesn’t mean you’re actually going to (promote) active learning. You need to be trained in those kinds of practices. If there’s not a budget for professional development to help faculty use those environments, they’re going to default to what they know best, which is lecturing.”

The study did show that many faculty adopt multiple teaching styles throughout a semester. Among the faculty who were observed at least twice, 42 percent demonstrated two styles. Based on its data, the research team concluded that three or four classroom visits are needed to reliably characterize an instructor’s approach.

“If your institution is really focused on student-centered teaching and visits your classroom only once a semester, on a day that you’re lecturing, then you’re going to fare poorly,” Stains said.

Much of the previous research into STEM instruction has relied on surveying faculty about their practices. Though the resulting data has proven valuable, Stains said, the flaws of human memory and perception inevitably find their way into that data.

“Surveys and self-reports are useful to get people’s perceptions of what they are doing,” she said. “If you ask me about how I teach, I might tell you, ‘I spend 50 percent of my class having students talk to each other.’ But when you actually come to my class and observe, you may find that it’s more like 30 percent. Our perception is not always accurate.”

So the research team decided to monitor STEM classroom practices with a commonly used protocol that involved documenting many types of student and instructor behavior during every two-minute interval throughout a class. An analysis that accounted for the prevalence of those behaviors allowed the team to identify seven instructional profiles, which were then categorized into three broad teaching styles.

Those efforts also led to the development of an app that runs essentially the same analyses conducted in the study.

“People can do their own measurements and see how they compare to this large dataset – see how either their department or college is doing – and say, ‘This is where we stand. This is where we want to go.’”

In the meantime, the study’s scale and interdisciplinary nature make it a “reliable snapshot” of how STEM gets taught to undergraduate students in North America, its authors said.

“There are many universities that are interested in integrating student-centered practices into their undergraduate STEM curriculum,” Stains said. “This could give them insights about what’s probably going on in their classrooms if they’re at a research-intensive institution.”

The research team received funding in part from the National Science Foundation and the National Institutes of Health.

Scott Schrage is a science writer/editor with the University of Nebraska-Lincoln.

Reprinted with permission from Nebraska Today.