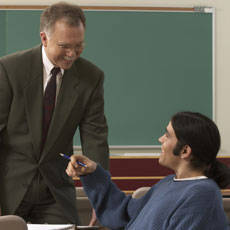 I was recently asked by a friend and colleague to review her syllabus. She wanted to make sure she had enough policies to address all the classroom issues that now emerge. Policies regarding plagiarism, class cancellation procedures, references to various official university handbook codes, and even mandated contingencies for an H1N1 virus outbreak were dutifully laid out. Indeed, the syllabus, despite some mention of the course itself, read far more like a legal document than an introduction and a guide to a classroom experience.

My colleague reported that this is what she had been told to include on the syllabus, and she was eager to do what was expected. Still, I sensed she was not totally comfortable with what her syllabus had become. For example, her section on the college’s process for handling plagiarism was itself twice as long as her succinct description of the actual course material and how the students might be expected to engage in it.

As I listened to her struggle to explain and justify the various policies, I began asking questions, gently and in good humor, about the loopholes—the ones that in my experience some students have keen ways of navigating to their perceived advantage. Was a roommate’s grandmother’s recurrent illness a “genuine emergency”? What constituted an “outbreak” of a virus? Were all students who appear to have cheated to be treated identically and absolutely? It quickly became clear that while fair policies are desirable and necessary, no policy can address any and all eventualities; and none are immune to student attempts at circumvention.

“So, what do we do?” my colleague asked. Even though I’ve struggled with these issues, I was a bit surprised by the first response that came to me.

“We need to remain vulnerable; and we need to celebrate our vulnerabilities as teachers.”

Now that I’ve had bit of time to reflect, I’ve decided that it was a good response. If I am not willing to be vulnerable to my students, I am not able to teach them. There are risks here—and not just a few, and not just those associated with our policies and their loopholes. Being vulnerable is the inevitable result of the trust we must have in our students, as we expect to teach and learn from them and with them in every respect.

I recently had a student who was missing classes and not submitting work. In a supportive spirit, I invited him for a talk. I explained that I really wanted to help him pass the course. Surprised that his performance was in such peril, he replied that he needed to pass the course—he was graduating that semester. Then he explained that he had just been diagnosed with cancer. Now I was really concerned and shaken. We, of course, stopped talking about course-related concerns and discussed his prognosis, his fears, his challenges, and the like. My student did not yet know too many details. That evening I called a friend who had won a battle with the same cancer and spoke with him at length, taking notes as to the options under various circumstances and so forth.

The next day on my way to class, I saw at a distance my cancer-stricken student, walking happily and joking with his friends. Soon he came to my office to discuss makeup work and so forth. I readily accommodated his requests. When I mentioned that I had talked at length with a friend who had a similar diagnosis, my student appeared sheepish and said he had to hurry or he’d be late for class. Not wanting to impose, I told him I was always available and that I hoped to see him soon.

He got the makeup work done. Considering his stress, his performance in the class was admirable: He more than passed the course. I distributed his final grade sheet last, hoping that would give me a chance to inquire as to how he was doing. It was then, more sheepish than ever, that he informed me that he had been misdiagnosed and was in fact fine after all.

I’ll let you draw your own conclusions about what happened in this case.

But the more important question is this: Would you as a teacher do anything differently if faced with a similar situation down the road?

I have affirmed that I would not. The benefits of being vulnerable as a teacher far outweigh the risks.

I need my students to know that I care about what we are working on together, and thus I care about them, even though I risk being taken advantage of. I want them to take risks when they approach learning new material and, to encourage them, I need to model such risk-taking myself, even as it leaves me open to criticism. No syllabus can ever make the classroom totally safe for teachers, and maybe we should not be so invested in trying to make it so. Ultimately, for every student who negatively takes advantage of our openness, there will be scores more who thrive because of it.

I have long argued that our students need not “like” us, except to the extent that their affection facilitates their trust in us. I also believe that students do not resent it when we challenge them with higher expectations, as long as they trust that we are fair and open. And in order for them to trust me, I must trust them—as foolish as I may, or may not, appear when I am duped.

Because, far more often than not, vulnerability provides what’s necessary for teachers and students to excel.

Dr. Robert Dornsife is an associate professor in the Department of English at Creighton University.