Discussion Board Assignments: Alternatives to the Question-and-Answer Format 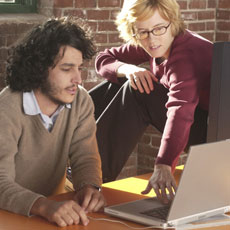 If you’re having trouble getting students to engage in the discussion forum, perhaps it’s time to rethink how you use this tool. “Think of it as a place to foster interaction between the students through a variety of means rather than just asking them questions, although that’s great too,” says Chris Laney, professor of history and geography at Berkshire Community College.

Laney uses the discussion forum extensively in his online courses. Participation counts for 25 to 30 percent of the course grade, so the students feel that they need to participate. Rather than sticking to the question-and-answer format, Laney uses role plays, debates, and WebQuests to engage students in the content and with one another.

While some people may think that the discussion forum is not the appropriate place for these activities, Laney has good reasons for doing it there. He tried using a blog but found it to be “clunky,” and the interaction was limited. “I feel that the discussion forum can be used for almost anything if it’s thought of as an assignment feature rather than a question-and-answer forum. … I’m very low-tech, so I don’t find myself being drawn to a lot of the fancy gadgets every year that are supposed to make online learning better. I think it keeps [the course] manageable if students are not having to learn some new technical thing each time, spending all their time trying to figure out this new technology. Whether it’s role-playing, debate, or a WebQuest, they’re using the same basic technology.”

Role-play
One forum activity, for example, asks students to do some research on a person living in an urban Roman city in the first century CE. Each student creates a character and writes a diary entry or letter recording what he or she did in the course of a day or a series of days. To do this well, students need to research a few things about the professions and classes that would have existed. “The students end up talking back and forth in character in a situation like that,” Laney says. “At no point have I actually asked a question.”

Debate
Debates also work well in the discussion forum, Laney says. He recently had students debate whether democracy in the Middle East would result in better or worse relations with nations in the region. It’s a pretty straightforward assignment; however, when having students debate it’s important to set clear ground rules to keep things cordial and to avoid simplistic arguments.

The same notion applies to question-and-answer discussions. For example, he once had a discussion that asked students to compare the democracy of fifth-century Athens to the current democratic system of the United States. Which is more democratic? When he checked the forum the next day there were a bunch of messages such as “I hate George Bush” and “Obama’s a socialist.” “Then I [posted], ‘This is way off topic. The main purpose of this assignment was to talk about Athens and learn about the Athenian system,’ but by then it was too late.”

Taking a lesson from this incident, Laney now includes a statement that says, “Note: The main purpose of this is to get a handle on the Athenian system of government, so please avoid judgmental comments about American politicians.” “If I do that up front, I don’t have redirect it a lot. We don’t tend to get off topic,” Laney says.

WebQuest
In weeks when a major assignment is due, Laney gives students a less intense discussion forum assignment. Rather than carrying on a discussion over the usual two-week period, he has students do a simple WebQuest and post their findings without having to respond to each other. For example, he may ask students to post an image, video, or music clip from the Romantic Period of art in the 19th century and write a brief description about why it’s considered an example of Romanticism.

When a discussion forum activity is over, Laney can click on an individual student’s name and at a glance assign a grade. It typically takes 30 minutes every two weeks to grade a 25-person discussion forum.