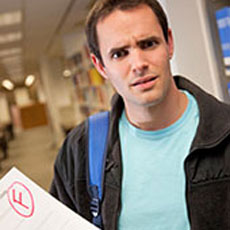 A few weeks ago I did what professors all over the land did: I logged my students’ grades and handed them in. This capped the end of an academic year in which I have never been more reviled and hated. In fact, this semester I gave my students permission to hate me to the fullest, and I in turn allowed myself the drunken freedom of “hating” them as well.

Before I stand accused of holding all kinds of warped pedagogical attitudes and beliefs, I want to make clear my belief that most learning, whether in kindergarten or graduate school, is built on a foundation of love and trust.

But as in many relationships, things can go askew, and within the love matrix negative feelings, even hatred, can develop. Good teachers and students deal creatively with strong negative feelings.

One might think: what kind of animosity can develop in say, a classroom of first-graders or at the other end of the educational spectrum, graduate students in a doctoral program? Experience tells me that there is plenty of it to go around.

For example, in the graduate school of psychology at the university where I teach, we studied such topics as psychopathology of childhood and analysis of group processes this past semester. It was a large class of bright, appealing and motivated students. They were as good as you will find in most places. Yet even in these seemingly intellectually-laden precincts, an exciting palpable sense of hatred started to brew.

A significant number of students found the class was not what they expected. “Too much free-floating discussion, not enough text-driven material” was what a few said. This seemingly minor quibble erupted into full-fledged despising and white-knuckle stare-downs. Although satisfying compromises were seemingly reached (we could talk about actual situations with children and refer verbally to text), there were holdouts.

One particularly bright and articulate student wrote to me in her weekly log (a requirement for each class session) “This class has just dragged on and on. This is not what we paid for. I won’t talk about how I feel during class and if you ask me to do it, I will disavow that I wrote this!”

And so the semester haltingly progressed. Students did learn, but the educational flow was impaired. It was a bit of a slog.

Of course, at the end of the semester came grading time. I had always found grading students to be joyless and depressing, and on occasion it would bring about periods of self-loathing.

Brooding about this semi-annual task, I came upon an idea. Why not share the burden with the students? On the last day of the class I asked everyone to divide into groups and grade each other. After brief discussion they handed in their grades. Not surprisingly, they gave each other A’s. I said I would take their recommendations under advisement.

I came to understand that many, if not most, of these students expected to get A’s almost as their birthright. They walked in with that expectation even before the class began. After all, they were “great” students. They were young, bright and articulate. One had the sense that they had been told that all their lives and what’s more, they had the scores to prove it. Their silent demands of the academic world were potent and powerful. It was if they were saying I am an “A.”

Editor’s Note. Coming tomorrow, part two of this article in which the author describes his final lesson for his students: “You do not get an A in life for just showing up and complying or even for cooperating.”

Simon Yisrael Feuerman, PsyD, LCSW, is the director of the New Center for Advanced Psychotherapy Studies (NCAPS), and an adjunct professor of psychology at Kean University.