The Effects of Collaborative Testing 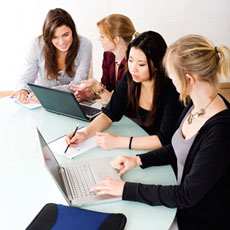 Why let students work on exams collaboratively? There are a number of reasons, most of which have been explored empirically. When students discuss questions and possible answers, they intensely engage with the content, which increases the learning potential of an exam experience. The activity develops cooperation and communication skills. But the reason most often given is that working with other students decreases exam anxiety, particularly for those students whose levels of anxiety compromise their ability to perform on exams.

When asked why they don’t use collaborative testing, most faculty report being afraid that students who have not prepared for the exam may inappropriately benefit from the knowledge of students who have studied. Grades should be measures of individual learning.

The study included some unique design features. To deal with the potential problem of students coming to the exam unprepared and thinking the group would pull them through, students were told to prepare for the exam as if they were taking it individually. Those who would be taking the exam collaboratively would be randomly selected at the beginning of the period. On test days, those selected to take the exam collaboratively were moved to another room. Their group interactions were observed by a proctor who evaluated the quantity of interaction, the level of enthusiasm, and the degree of give-and-take displayed by the participants. (p. 166) The groups did not have to agree on answers, although they could change their answers based on discussions that occurred within the group. Tests were still submitted and graded individually.

Consistent in the research on collaborative testing mechanisms is the favorable response they generate from students. Students regularly report enjoying the experience and indicate they would choose it in the future, if given the opportunity. In this study, students said the testing mechanism was beneficial because it helped them develop good working relationships with classmates and helped them remember material they had forgotten. There were students in this study who did perform better on the tests they took individually, and a third of those students thought they did better on the individual exams because they found the discussions with other students confusing.

The researchers conclude that collaborative testing is a “worthwhile technique.” “For, even if overall test performance is not greatly improved by collaborative testing, the positive experiences of increased camaraderie and anxiety reduction it engenders could constitute substantial long-term benefits in the form of increased confidence, motivation, and willingness to continue one’s education.” (p. 173)

Reference: Pandey, C., and Kapitanoff, S. (2011). The influence of anxiety and quality of interaction on collaborative text performance. Active Learning in Higher Education, 12 (3), 163-174.