To Improve Student Performance, Start Thinking Like a Coach 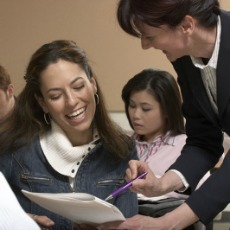 I have a confession to make. I was wrong. You see, I once thought that teaching was lecturing, and I thought that because that is how my graduate mentors taught me to teach.

But I was wrong. Studies have shown that lecturing has little to do with teaching. A University of Maryland study found that right after a physics lecture, almost none of the students could answer the question: “What was the lecture you just heard about?” Another physics professor simply asked students about the material that he had presented only 15 minutes earlier, and he found that only ten percent showed any sign of remembering it (Freedman, 2012).

So what is teaching? John Hattie compared more than 100 factors related to student achievement from over 180,000 studies and discovered that feedback on student work had the most effect on learning (2009).

OK, I give margin comments like “vague” or “needs synthesis” on student work, so I’ve got that covered, right? Unfortunately, the brief margin comments that most faculty give on student work are almost completely unhelpful to the student. The student who sees “vague” thinks to themselves “What is vague about it? It’s not vague to me. Why is it vague to you?” The student who did not include a synthesis might not know what a synthesis is.

Simply pointing out a student’s errors is not all that useful to the student, but we do it on the mistaken belief that the purpose of feedback is to justify the grade. We subtracted points for 10 things, and so we need to list them in the margins.

But feedback is fundamentally different from grading, and conceptually separating the two is a key to great teaching. Grades are backward facing—they are an evaluation of past performance. Feedback is forward facing—it is information aimed at improving performance in the future.

Step away from the red pen
As Grant Wiggins notes, when it comes to giving effective feedback, the key is to stop thinking like a grader, and start thinking like a coach (2012). Coaches are fundamentally teachers, but they spend little time lecturing or grading. Instead, they teach through feedback. Ninety percentage of their teaching is done by watching a player’s performance and giving feedback on what they did right or wrong, and how to improve.

Importantly, the kind of feedback they give to players is fundamentally different from the feedback most teachers give to their students. A coach doesn’t say “you’re standing wrong” and walk away, similar to a teacher leaving a margin comment that a student’s work is “vague.” That would not be helpful. Coaches instead say precisely what the player is doing wrong, and what they should be doing instead. For instance, a soccer coach might say:

“You are allowing goals because your technique is wrong. You are holding your hands down by your side like this. Because of this, you can’t get your hands up fast enough to block a high kick toward the corners. You need to hold your hands higher like this, and keep your knees bent like this so that you can react quickly to the shot. Now you try it.”

Note how the coach is not just telling the player what she did wrong, but also showing her the proper way to do it. As teachers we spend a lot of time telling students what they did wrong, but very little time showing them what doing it right looks like. Modeling good work is a key component of feedback—and improving student or player performance.

A coach also doesn’t give the player a laundry list of things to work on at once, but rather limits his or her feedback to one or two things for the player to work on at a time. For instance, the HBO series “Hard Knocks” follows an NFL team in the preseason. One episode showed a rookie running back talking to his position coach. The coach said to the rookie “What one thing are we going to work on today?,” to which the rookie replied “Ball control.” “Good,” the coach said. “That’s the one thing we’re going to work on today.”

This is instructive. The rookie does not just have one thing to learn–the rookie probably has 30 things to learn. But when it comes to improving performance, the coach doesn’t expect the player to work on all of those at once. The coach knows that improvement comes sequentially by focusing on a limited number of things at a time.

Similarly, the best way to produce improvement in the student’s performance is to focus your feedback on one or two things at most to work on per assignment. Yes, you provide a grade and a brief account of how it was determined. But feedback is separate from that account. Like the coach, you are essentially saying to the student “I’ve listed the things you will need to work on. Now we will work on the first one.”

In essence, you turn your attention from the past to the future, and pick one or two major themes relating to problems in the student’s performance to provide feedback on. Perhaps you want to focus on how to frame a thesis. You might talk about what a thesis is, why the work lacked one, what thesis for the work would look like, and how to put together a thesis in the future.

Note that you are spending time discussing the process of developing the work. Too often we only discuss the product, not the process that went into developing it. The product is a result of the process, so without discussing process, we are not providing information that the student can use to do better in the future.

Why students are grade-obsessed
Conceptually divorcing feedback from grading will also start to reduce students’ grade-obsession. Faculty often complain that students are grade-obsessed, but how did they become that way? They were not born that way. They did not drop out of the womb grade-obsessed. They were taught that, and to a great extent they were taught that by us when we put all feedback in service to the grade. We do it when we spend our first day of class talking about the grading system. We are telling them that the point of education is the grade.

We also teach students to be grade-obsessed by creating grading systems to preserve their errors. Student’s come into our offices to brow-beat us into raising a poor grade on an exam because they know that the grade will get carried forward to their final grade. They need to do something about that grade itself—not the learning.

By contrast, if a rookie running back starts camp without knowing pass patterns, but gets them down by the end, the coach does not say that “I can’t start him because his understanding is the average between not knowing at the beginning and knowing at the end.” Players are evaluated by the endpoint of their learning curve, not its average.

We all learn by our mistakes, and should encourage our students to make mistakes in order to learn. But instead we have a system that preserves, and hence punishes, students for their mistakes. Then we wonder why they are grade-obsessed.

There are many more rules for providing good feedback, but the first move is to stop thinking like a grader and start thinking like a coach. Only then will you start to see real improvement in your students’ performance.

As always, I welcome your comments, criticisms, and cries of outrage.

Dr. John Orlando helped develop and lead online learning programs at the University of Vermont and Norwich University, and he has taught faculty how to teach online as well as how to use technology in their face-to-face teaching.