The Benefits of Study Groups 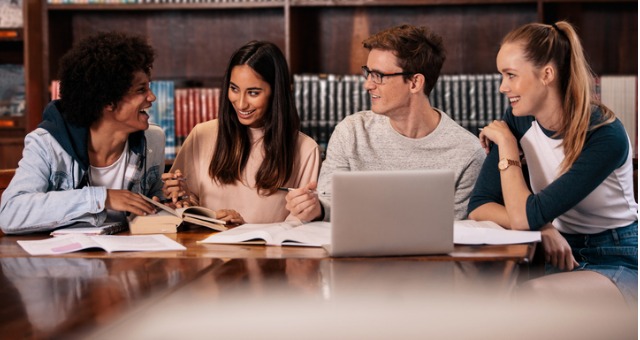 Maybe we should be making a stronger pitch for student-led study groups. There’s all sorts of research documenting how students can learn from each other. But, as regularly noted here and elsewhere, that learning doesn’t happen automatically, and some of us worry that it’s not likely to occur in a study group where there’s no supervision and distractions abound. Recent findings should encourage us to give study groups a second look.

The groups in this research involved two or more students working together outside class in groups they formed and facilitated. A cohort of 463 undergraduates enrolled at 38 different institutions and majoring in five different fields answered questions about their study group experiences—if they studied with others, why they chose to do so, what they did in those groups, and how helpful they found the experience.

A large majority of this cohort (78%) reported that they participated in at least one group study session per semester with a median of four sessions. This percentage is a bit higher than has been reported in previous research. Students said they opted to study with others because the professor encouraged it and their peers invited them. Their groups handled all the meeting logistics and members decided collectively what they would do during the session.

And here’s what’s impressive: the top three study strategies students reported using in these groups were asking each other questions, discussing course materials, and quizzing each other. Those are evidence-based strategies. Asking questions and discussing the content are elaborative activities that deepen learning, and test-enhanced learning (testing with questions) enhances memory by providing retrieval practice. “Each of these has substantial empirical support with regard to benefits for long-term retention, falling into the category of ‘desirable difficulties.’ [a la Bjork].” (p. 18)

And there’s more good news. The data showed that a student’s GPA correlated positively with how frequently evidence-based study strategies were used—particularly, reflective elaboration of the content (mnemonics), generation (making outlines, flashcards, study guides), and spacing (shorter group meetings but more of them). Now, with correlational research, it’s not possible to say whether these learning skills are being developed in study groups or whether students who already use these approaches tend to gravitate toward studying with others.

Students said they chose to study with others in hopes it would improve their understanding of the material. And most of them reported that it did. More than 60% said their level of learning in study groups was somewhat more or a lot more than they learned when studying individually. Almost 70% said that being in a study group increased their motivation to study. Interesting, however, only about 20% said they preferred studying in a group compared with almost 50% who said they always or mostly preferred to study alone. Could this preference reflect the many bad group experiences students have had?

Findings like these give us reasons to encourage students to study together, and we can use these results to offer advice with the potential to improve what happens in those groups.