Each Academic Program Has a Part in Teaching Diversity 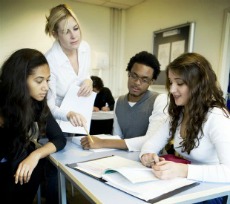 As the student body becomes increasingly diverse, it’s important to have faculty incorporate multicultural design into their courses regardless of discipline. Although it may not seem that all disciplines lend themselves to including multiculturalism as a learning goal, consider how Christine Stanley and Mathew Ouellett frame the issue.

“We approach it from four conceptual areas, which are all inextricably linked— content, teaching methods, who we are as instructors, and who the students are,” says Stanley, vice president and associate provost for diversity and professor of higher education administration at Texas A&M University. “A lot of faculty members, particularly those who identify as white, don’t see how identity connects with their disciplines and how they teach and what they teach.

“For example, a lot of faculty in the sciences and engineering probably think that their content doesn’t lend itself very well to talking about these issues, but it does. In the real world, engineers rarely solve problems alone. They work with others to solve problems. To me, working with others is a diversity issue.”

Ouellett, associate director of the Center for Teaching & Faculty Development at the University of Massachusetts Amherst, adds that using multicultural course design can improve students’ critical thinking skills. “Some of the most recent research on groupthink says that a minority view is often tremendously helpful. Even if the minority view doesn’t prevail, it makes the people who hold the majority perspective think more deeply and harder about the view that they hold.”

Stanley and Ouellett contend that each academic program needs include multicultural learning as an integral learning goal. “One of the first places to start is to ask, What do I want my students to know as a result of taking this course in order to live, grow, and function in an increasingly diverse, global, and complex world?” Stanley says.

“These goals should not be tacked on at the end or be separate, stand-alone goals. They should link directly to the discipline and to your institution’s goals for the undergraduate experience,” Ouellett says.