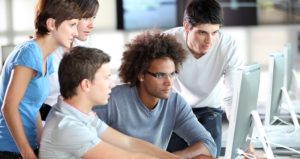 According to a recent report by the Institute of International Education, there were more than 764,400 international students enrolled in U.S. universities and colleges in 2011/2012. This was a 7 percent increase from the previous school year. International student services on campus organize social events to facilitate interaction between international and American students and provide academic support for those from non-English-speaking countries. Despite their efforts to promote diversity, the transition to American universities is still challenging for international students. Many feel homesick and experience emotional stresses due to cultural differences and have difficulty in making American friends and sustaining long-term relationships.