Improve Your PowerPoint Design with One Simple Rule 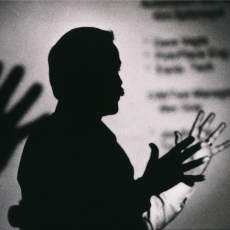 We’ve all heard the expressions “Death by PowerPoint” and “PowerPoint-induced coma.” I think we’d all agree that most of PowerPoints stink. Yet after sitting through presentation after presentation that bore us to tears, we turn around and subject our students and colleagues to the same torture that we find so excruciating. Why?

The good news is that 90% of the problem can be solved by following one simple rule: No bullet points.

Reread the rule again (and again, and again) to make sure that it sinks in. Bullet points are the primary source of Death by PowerPoint. Bullet points are basically ugly wallpaper thrown up behind the presenter that end up distracting and confusing the audience. The audience is getting a message in two competing channels running at different speeds, voice, and visual. It’s a bit like listening to a song being played at two speeds at once. The audience member is forced to ask themselves: Do I listen to the presenter (which is running at one speed), or read the bullet points (which I read at a different speed)?

Research (Mayer & Moreno) has demonstrated that running a competing text channel with a voice channel actually lowers retention by sending two incongruent messages to the viewer. The audience member is literally trying to focus on two different things at once, and ultimately loses the whole message. Presenters would be better off using no visuals at all and simply speaking to their audience. There’s a reason why State of the Union addresses do not include PowerPoints.

The ultimate source of the error is the belief that the purpose of PowerPoint is to project your notes. We once used 3 x 5 cards for our notes. When PowerPoint came along we assumed that we should now project those notes to our audience. But this is wrong. Your notes are for you, not others.

The Real Purpose of Visuals
The real purpose of visuals is to amplify your message with complementary imagery. For example, say you’re talking about something that often confuses students. Don’t just repeat the words coming out of your mouth on the screen. Instead, project an image of a confused student in order to focus your audience’s attention on your message with an emotional driver. The image does not compete with your audience’s attention, but rather helps draw it together by providing a visual cue to enhance thinking.

Online and Face-to-Face
Shifting to visuals will not only enhance your live presentations, but also your online content. More and more we’re seeing videos in online courses. These videos are typically recorded narration with imagery layered on top, and they are an excellent way to improve student interest and retention.

To create such a presentation, start by recording the narration (narration determines pacing) and then add the imagery to illustrate concepts. Audacity is a free download that is perfect for recording and editing audio. Make sure to use a quality headset microphone, rather than a free-standing microphone, which generally produces poor quality (unless it’s an expensive studio microphone). The imagery can then be added with Windows Live Movie Maker or iMovie.

Another option is to drop your images into a PowerPoint deck, and advance the deck while you speak, recording the screen and your voice with screencasting software like Jing. The drawback is that Jing only provides five minutes of recording time, so you will need to purchase Camtasia Studio for longer presentations. But Camtasia Studio allows for really elegant transitions that will greatly enhance your presentations, so it might be worth the purchase.

The Experts
There is a simple secret to getting good at anything: Find someone else who is good at it and do what they do. Here are three sources that will transform your PowerPoint slides into powerful teaching devices: