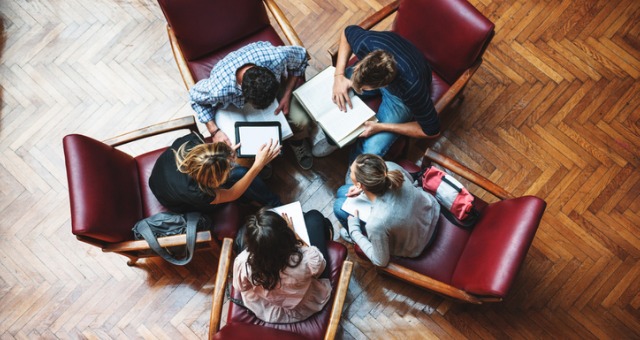 The approach to course reading described here is not the result of some altruistic action to save students money on textbooks. Nor was it a brilliant “Aha!” moment regarding the neuroscience of learning. It was the result of an attempt to find a good old-fashioned textbook that would give students all they needed to know about coaching and mentoring in one handy reference that they could keep the rest of their careers.

In all sincerity and earnestness, I was sure that someone had written a concise and comprehensive book about coaching and mentoring. The class I was teaching was a graduate class for students working towards a MEd in adult and higher education. I found a couple of titles and read through them—close, but no cigar. I grabbed a couple more promising books. Same result. After about a dozen books, I was starting to lose faith. Some of the books I had read were excellent as far as they went, but I found nothing comprehensive. Could they become part of a recommended list of books to read? Could there be a list rather than a single text?

What emerged without an “Aha!” was an idea that with a well-developed list of books, each student might read and report on what they had read. I had a vague memory of seeing some executive book summaries that busy executives could subscribe to, and rather than reading a whole book, they could read a much-abbreviated version. We could use that format!

So, the assignment developed. A list of books—all of which I had read and thought of interest—was compiled. The class was imagined as a very interactive format, so the ideal number of students would be under 20, and the book list provided had about 30 books. Students could argue for a book not on the list, but they had to provide a good rationale and get faculty approval to use the book, which would then be added to the list.

Students would pick one book, no duplicates allowed, and would summarize it in a standard eight-page summary format. Additionally, a sample was provided from a subscription service. They had creative license in terms of appearance, but it was to be a detailed summary and no critique involved in what they wrote.

The class met three weekends, with a two or three week break in between. Students had two weeks to read and write their summary, which they would post to the Learning Management System. They would then get feedback from two of their colleagues, prepare a final draft, and bring the final draft to the second class. At the second class they would share their book with two different students regarding key points, applications, and personal/professional insights from the book.

At this point, each student had read one book and summarized it, been exposed to two other books to provide editorial assistance, and read two different book summaries in a small group setting. In addition, before the final class, they were asked to read three more book summaries. In total, they were exposed to nine different books by reading 56 pages and never had the expense of a textbook. So, the exposure was arguably greater and broader than a regular textbook might provide.

Overall, the students started by choosing a book that had some basic appeal to them, and then “owned” it by authoring the summary and discussing it with peers. Intuitively, allowing this type of ownership made sense, as well as covering multiple perspectives on the topic (Wentzel & Wigfield, 1998; Hardiman, 2012). In the final class there was discussion of the process, which all students seemed to like, and discussion of the books themselves—whether or not they should be kept on the list and if not, why? (If they were removed from the list it was usually because they were too long for the length of the class or they were too narrow in terms of focus.)

Had I thought about the Jim Collins book, How the Mighty Fall (2009), I might have been more cautious after the apparent success of this process. But after three successful iterations, I decided I would try it in one more class; this class pertained to the organization and administration of higher education. The textbook I had been using was thorough but a bit of a sleeper. Despite this, students liked the class since we used a format a colleague referred to as a “living textbook.” Almost every week featured a guest discussant from different higher education institutions in the area who would talk “real-world” to the students.

The development of the book list for this class came from books that local higher education leaders were reading, which created a lot of variety within the book list. The process for the selection of books was similar—one per student, no duplication, and the summary utilized the same model. I added a two to four page analysis as a means of connecting to current events. Additionally, the number of books the students were exposed to would be greater as they would hear from everyone else in the class, not just a small group.

And that’s where the difficulties came. Originally, the process in my first class took relatively little time in the face-to-face setting, probably about two hours total. In this latter setting, as each student would present on their book (30 minutes each) the amount of face-to-face time spent increased radically, thus leaving less time for other interactions. The class time together, a bit short of three hours, became a tight squeeze between guest speakers/discussants and the book facilitations. The students liked the idea of the book list and reading in areas that were relevant to each individual, but the tight time frame was uncomfortable. Adjusting the process so there is less total time, perhaps just one face-to-face session, for the book sharing is the imagined solution.

There is good support for the concept of students having greater choice in their educational pursuits, and this approach to class readings seems to have been effective based primarily on student feedback and faculty perception of discussion and product. This approach worked well in content areas where there is no single truth, but it might not work well in first year chemistry. However, if you have a class where you think this might work, I’d be happy to discuss further.

Collins, J. (2009). How the mighty fall, And why some companies never give in. NY: HarperCollins.

Ed Cunliff is currently a Professor of Adult and Higher Education at the University of Central Oklahoma. Ed has over 35 years’ experience in innovative professional and organizational development.  He has worked in social services, health care and higher education and has served in a consultative role with dozens of organizations in higher education and non-profit sectors. His current learning and research activities include: transformative learning, authentic leadership, and MBE (mind, brain, education).