Failure is an Option: Helping Students Learn from Mistakes 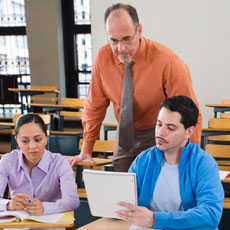 Failure is one of the best teachers. Most of what I learned about home maintenance I learned from my mistakes. The military understands the benefits of failure and actually gives soldiers tasks that they know will lead to failure at some point as a part of their training. Similarly, pilots are trained on simulators and given a variety of emergency situations until they fail.

But instead of using failure as a valuable teaching tool, education discourages it as, well, a sign of failure. A student is measured at various points along a course on how well they have mastered the material. Since each assignment is graded based on its proximity to success, and the final grade is determined by the aggregate of each individual grade, failure is preserved and carried with the student throughout the course. The result is that students become failure-adverse, demoralized by failure, and focused more on the grade than the education.

One way to reverse this trend is by using gaming in education. Students who fail in video games do not suffer the same blow to their self-esteem as those who receive a low grade on an exam or report card. They simply try it again. I’ve previously written about this topic in the article What Games Teach Us about Learning.

We must also rethink the purpose of grading itself. Too many teachers have the “apple sorting” view of grading as a process of separating the good students from the poor students. But consider the conversation that I had with a teacher many years ago. I had just started teaching at a college and was told that this particular teacher was widely considered the best in the school, as well as the toughest. Stopping at his office one day I asked him about his reputation as both the best and toughest teacher in the school. I made the comment that he must not give many A’s, but he responded by saying that everyone in his class gets an A.

I asked him how this could square with this reputation for toughness. He replied that when a student hands in a paper he is given comments and told to rewrite it, and must rewrite it over and over until it is an A-quality paper. Only then it is accepted.

This story proves wrong the view that low grades are a sign of rigor. This teacher expects great work of his students and requires them to keep working to improve the paper until it reaches that level.

We learn to write by making mistakes and correcting our mistakes. Teachers who hand back an assignment with comments and a grade only encourage students to leaf through to the grade and store it away. Expecting them to correct their failures is genuine education.

Consider how to incorporate failure into your teaching in order to generate success.

Feedback
As usual, I encourage your comments, criticisms, and cries of outrage on the blog

Resources
Vocab Sushi: A vocabulary builder that provides a great example of a game for higher education. http://www.vocabsushi.com/

Parade of games in PowerPoint: Dianne Jones’ wonderful collection of free game templates that can be used by any teacher. http://facstaff.uww.edu/jonesd/games/