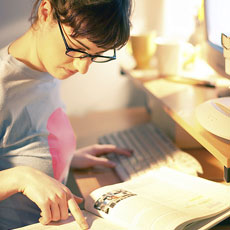 In an effort to make my lessons about plagiarism and the appropriate citation of sources more personal for the students in my rhetoric and research classes, I now use an assignment that forces them into the role of victim rather than thief. The results of my most recent experience with this approach were encouraging.

On a Friday approximately three weeks into the semester, I gave students this assignment: Create an original work that articulates your understanding of one of our university’s core values — integrity, generosity, servant leadership, hospitality and excellence. You may express your understanding through a poem, collage, song, brief essay, short story, slide show or two-minute video.

Freshmen are introduced to these core values in our First Year Experience seminar course, and I encouraged students to invest some time in their creations. “Have fun with this project,” I said. “Try to impress me and your peers with your creativity.” I promised each person 60 seconds to share his or her creation with the rest of the class the following Monday.

Here is what happened. The students who had invested the least amount of time in the assignment selected the projects that clearly had required a great deal of creative thought and time to produce. A few of the students walked around the room and then returned to their own work. And most of the others wandered around until they found a project (other than their own) that they liked enough to “claim” as creative and admirable.

Then I shocked them with this instruction: “Cross out the name of the person who created that project and write your own name in its place. When I grade these assignments this afternoon, I will give credit to the student, or students, who claimed the work, not to the student who created it.” That is when our class session got interesting. Initially, no one spoke. Students stared at me, looked at one another for confirmation that they had heard me correctly, and then looked back at me for an explanation. I played dumb, asking if they had any questions. Of course they did. Several students asked why I would do such a thing. Two were openly angry, telling me that giving someone else credit for the work they had done was wrong. Several others said, “If I had known you were going to let someone else steal my work, I would not have wasted my time completing the assignment in the first place!”

A few students, however, were clearly relieved by this sudden turn of events. I asked one of the students, who had not done the assignment at all, how he felt about this new arrangement. He said, “Well, I feel pretty lucky right now, like I’m getting something good for free. But I also feel guilty for accepting a grade I didn’t earn.” He was conflicted, and the other students in the room were compassionate, not outraged, by his willingness to accept the “freebie.” One of their defenses for the student’s reasoning was that the consequence for taking credit for someone else’s work was significantly smaller than the consequence for taking a zero for his own failure to complete the assignment.

I collected the projects, and then encouraged students to talk more about what I had just done. One student shook his head and said, “Something is going on here. This just isn’t right.” A few comments later, another student connected the dots: “I get it now. This is exactly what we do when we plagiarize sources in our papers.”

I am not naïve enough to believe that all of the students were instantly convinced of the immorality of plagiarism, but I do believe more of my students understood what is at stake when they make decisions about how to use the information and ideas that they find in published sources. For a brief moment, they experienced the injustice of someone else taking credit for their work, which made them more susceptible to the appeal of academic integrity. And that’s a good place to begin instruction.

Deborah Zarka Miller (Fox) is an Assistant Professor of English at Anderson University where she teaches creative writing, composition and literature. Her creative non-fiction has appeared in three anthologies, and she released her first young adult novel, A Star for Robbins Chapel, in 2010.