A College Scare: Traditions and Stories of Halloween Past 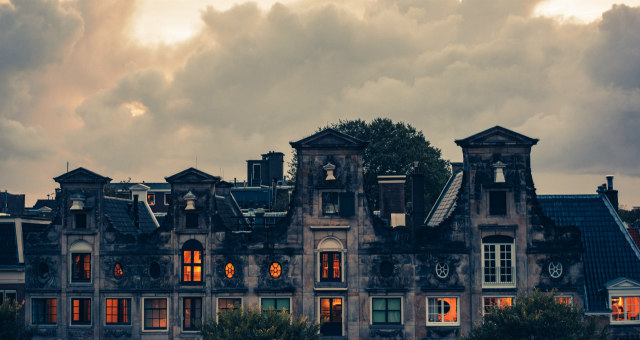 It’s that time of year when spooky stories emerge and haunted traditions appear! From ghost stories to pumpkin-carving competitions, we found a few colleges and professors who have made their own Halloween traditions.

On Halloween (or the class immediately before), Dr. Tom Carter, associate professor at Roanoke College (Va.), takes his class to meet at a cemetery, but it’s not all spooks and scares.

Carter says he was inspired by Ray Badbury’s “The Halloween Tree,” where a mysterious figure takes a group of kids through time to explore the rich, mythic foundations of their trick-or-treating traditions.

In response to this, and with the perfect spot nearby Roanoke College, Carter started his Halloween tradition of venturing into the relic of Salem’s segregation days at East Hill Cemetery North.

Here, the students and Carter discuss their own Halloween celebrations and their families’ funeral traditions. They also consider why Halloween and similar traditions occur during the fall.

At the cemetery, they gather near the Cobb family plot and begin looking at the dates. Here, Carter says the students begin to see the hardships the Cobbs endured; for example, the mother outlived all but one of her children.

“We also talk about a rather spurious but still intriguing idea from Herbert Spencer’s “Principles of Sociology” (1912) that suggests the ghost experience might have been what led ancient humans to develop religions and, ultimately, civilization,” he says, noting his paraphrasing.  “Ghost stories are perhaps quite culturally significant.”

Ultimately, he hopes students gain an appreciation for the rich culture behind Halloween night. “I hope that they begin to see that Halloween is not just candy and frights … but that it’s one time of the year that we, as a culture, remember our beloved dead (the All Saints and All Souls traditions), take a quick glimpse at a “memento mori,” and gain a bit clearer perspective of how we’re still (in 2019) tied to the earth’s natural rhythms,” Carter says.

Halloween wouldn’t be the same without pumpkin carving traditions, and that’s exactly what Penn State University does at their annual Pumpkin Festival in the Arboretum at Penn State’s H.O. Smith Botanic Gardens.

The Pumpkin Festival features multiple activities such as crafting corn husk dolls, a spooky painted wall in the Limestone Cave where jack-o-lanterns provide the only light, and lighted pumpkins that help attendees make their way under the Hosler Oak, a large tree. A mix of pumpkins that are both whimsical and scary comprise the pumpkin contest. From carved cats and koi fish to the Penn State emblem, there’s always a variety.

Initiated in 1998 and sponsored by the River Campus Libraries, the Scare Fair is held annually in the Rush Rhees Library at the University of Rochester (N.Y.). This event gives students a chance to navigate the “spooky” stacks—the iconic Rush Rhees tower—where a ghost story is said to have taken place. The Scare Fair is a rare opportunity that students have to tour the tower, as it’s only open for tours two times a year

Two years ago the Scare Fair incorporated a Zombie Apocalypse, where “survivors” competed by building their own life-size fortress for protection.

One event that remains consistent is the fair’s main attraction, Stack Stalk, a scavenger hunt that helps students learn their way around the stacks by having them find specific books. Despite a spooky story, the event’s main focus is to provide fun while remaining educational.

Most of us know, or have at least heard of, The Exorcist, directed and written by William Peter Blatty, an alumnus of Georgetown University. What you may not know is that some of the actual scenes were filmed on the school grounds. In honor of the movie, participating students host what’s known as “The Healy Howl.” At midnight on Halloween, students walk to the Jesuit cemetery and let out howls for one minute.

Whether it’s a pumpkin-carving contest or midnight howl, Halloween traditions on college campuses can unearth buried history that often only emerges on Halloween night. If you have any Halloween traditions that happen on your campus, we’d love to hear about them! Post them in the comments below but try not to scare us too much! Boo!