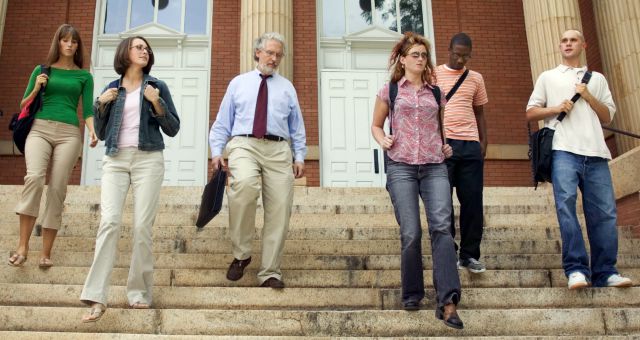 There is a discourse of deficiency around students—what they can’t do, how “ill prepared” they are—that gets aired at nearly every faculty meeting. We read it in op-eds online. We hear it in state legislatures and in copier rooms. It is the air we breathe, especially if we teach in community colleges. Certain populations of students are considered more deficient than others. These populations are partitioned by institution type and placement level, rather than by race or class. Community college students and students who have landed in developmental classes are considered the most deficient of all. We blame the high schools they came from and, sometimes implicitly, we blame them. They are lazy. They need handholding. They simply don’t have the skills. There is only so much we can do with them.

While it’s impossible to ignore the discourse of deficiency, there is also a competing discourse of faith. Many of us know that our students are capable of much more. We know that they can do real academic work. We know they can “reach the final stages of Bloom’s taxonomy,” to quote a concerned colleague, if we give them a chance and show them how. There is a real divide in the faculty body between those who cling to deficiency, claiming that students need this and need that, and those of us who believe students deserve exactly what they’ve paid for: a college education.

This faith in students is not naïve. We know that, in their high schools, some students have been tracked into courses that aren’t designed to prepare them for college. Some students have been working with MLA or APA format for years, while others have never heard of citation. Our students have reading needs and are not where we would like them to be in terms of mathematical competency. We know all this and acknowledge that it can lead to challenges. Still… Still, these students are capable of doing real academic work. Along with many others, the 400 attendees of the recent Conference on Acceleration in Developmental Education, mostly writing, reading and math faculty, have been cultivating this discourse of faith. We are finding new ways to deliver education to those students most in need without falling back on deficiency. We are providing co-requisite courses, intense academic literacy courses, and restructured math courses that rely on students’ abilities. We are doing this in an attitude of faith.

This faith in our students is not naïve. We know that they can do real academic work.

All of us are learning all the time. We are, to quote Freire, “beings in the process of becoming— … unfinished, uncompleted beings—in and with a likewise unfinished reality.” The students who end up in our developmental education classes may not understand MLA format, but they understand something deeper and richer. They may not have trained their critical thinking faculties, but they have thought critically.

From my experience teaching co-requisite classes, I can think of dozens of examples, but a student I’ll call “T” illustrates my point. “T” grew up in Sandtown, the same Baltimore neighborhood in which Freddie Gray grew up. She returned to college after having three children. She was in a vocational program in high school, one that did not pan out in terms of a career. She returned to school after a long absence, with rusty skills. In my co-requisite class she wrote and thought about discourse communities and pedagogy, and she wrote a stellar reflective essay that integrated some of the course readings on education to analyze her own experiences. “T” was not deficient in any way. By the end of the semester, she self-identified as a scholar and a writer.

We have to ask what students are getting from our classes. Here are four things I think higher education should provide for students: content skills (in my case, that means making them better writers), tools to think (making them better thinkers), an awareness of counter-histories they would not encounter elsewhere (making them more culturally competent), and a deeper sense of consciousness. I want my students to be conscious of decisions that they make and can make. I want them to be conscious of others, and conscious of consciousness. We can’t do any of those things by pointing to their deficiencies.

When we turn from a discourse of deficiency to a discourse of faith, new opportunities become possible in the classroom. We move away from unrealistic and unsuccessful part-to-whole pedagogies, toward more holistic pedagogies that embrace the student, as they are, not as we would like them to be. Like my students, I am in a constant state of becoming. I am learning as much from them as they are from me. I think it’s time to replace the discourse of deficiency with something more powerful: faith.

Jamey Gallagher is a writing teacher and the assistant director of the Accelerated Learning Program at the Community College of Baltimore County.