The Joys of Musical Breakout Rooms 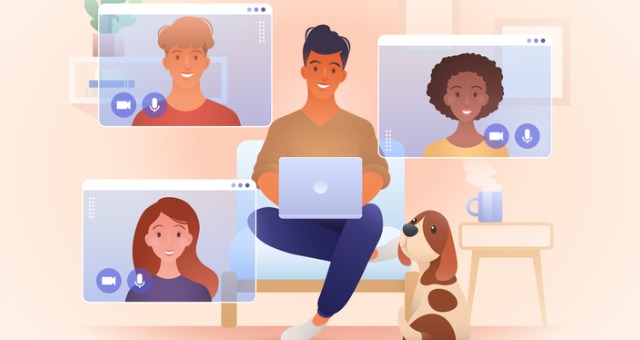 As we head into another semester run by the little pandemic that could, some of us are heading back into classrooms, others are teaching from home, and the rest of us find ourselves in the limbo of hybrid teaching. Keeping things new and fresh (always a challenge) becomes even more demanding and exhausting in an environment where how we teach can, of necessity, turn on a dime.

Last fall, as I was setting up my slides and Zoom room for my half-in-the-room, half-on-Zoom session, I overheard one of my students in the classroom comment, “I don’t even know who’s in this class because we’re never all in the same place.”

Ouch. I don’t know about you, but I don’t think that’s much of a way to run a class.

In light of that offhand comment, I thought it was time for all of us to get together in the same space—one where we could safely see the entirety of one another’s faces. First, to reduce the likelihood that my best-laid plans would fall flat, I wanted to make sure my students agreed, so I added an item to my mid-semester check-in assessing their interest in a full-Zoom class. The response was overwhelmingly positive, so I set up two full-Zoom classes in the next two weeks: one on a Tuesday and the other on a Thursday so everyone was giving up one in-classroom day.

Now, what to plan? Definitely not a lecture.

After my brief intro, I let Zoom randomly assign the class into breakout rooms of about four students each, intentionally keeping the rooms small. Then, I gave everyone instructions to spend at least two minutes at the top of the session introducing themselves and chatting. Meanwhile, I used the broadcast feature to send the question into the rooms in case they forgot what they were supposed to be talking about.

We reconvened after about seven minutes, sharing feedback from the breakout rooms in the larger Zoom session. As we summarized, I got to call on students who never raised their hands, knowing they were prepared and/or someone else in their room could bail them out. Then, we repeated the process with a new question and reshuffled breakout rooms for the rest of our 75-minute class.

It was a hit. It was fun and energized, and the students loved having a chance to talk to one another. By choosing my questions carefully (and ahead of time), I was able to make sure instruction occurred alongside the chance for socializing. I had a great time, and my students commented favorably on the lesson both that day and at the end-of-semester evaluations.

Interested in trying this out? Here are a few tips.

Choose questions that don’t have a single right answer. This provides an opportunity for critical thinking and levels the playing field no matter the mix of intellect, academic discipline, and preparation in each breakout room.

Use for review, preview, or instruction. I used this for instruction, but it would also work for getting a sense of what students understand as you prepare to introduce new material or what they know as they prepare to take an exam.

Allow time for socializing. I determined at the outset that, under the circumstances, giving them a chance to talk to one another was just as important as the day’s content. Consequently, I padded the times (two minutes for socializing and five minutes for the question) and explicitly told them the first two minutes were for socializing. Is it possible that they used the entire time to just chat? Maybe. But they knew they’d be responsible for an answer when we re-convened, so it was on them to decide how prepared they wanted to be.

Remind them what they’re supposed to be talking about. Their socializing time provided an opportunity for me to use the broadcast feature to put the question out into rooms so there was no, “What were we supposed to be talking about?” While they talked, I jotted down breakout room numbers beside their names and decided whom to call on (if I ran out of volunteers) when we reconvened.

Let their rooms be their rooms. I intentionally stayed out of the rooms unless someone had a question. And, as previously noted, I kept track of who was where, and who mysteriously disappeared.

Keep it light and keep it moving. Part of what made this work was that it moved quickly (which made a 75-minute class go more quickly as well), but the whole group discussion gave them a chance to make sure they got the key points and could ask questions and/or make connections.

Keep the discussion buffer. I set things up so students wouldn’t exit one room and then head directly into another—I was afraid that set-up would make my introverts’ heads spin. But I also kept the discussions short (it was difficult sometimes) so students would be less tempted to turn to electronic (and other) distractions. Full group discussions consisted of key points, student questions, and a transition to the next room.

Ask for input. As I noted earlier, I polled my students beforehand regarding their interest in a full-Zoom class. In part, I wanted to make sure there was sufficient interest to justify the time I’d spend re-working a class that could easily have been a lecture. Interest was high at the time but now, a full year later when Zoom fatigue is real and face-to-face classes have returned, I might get a completely different answer. In addition, I created a survey on our LMS to poll the class afterward. This gave me a good sense of what worked and what I needed to adjust for future classes.

Set them up for success. To keep things running smoothly, I structured everything from the questions to the time frames ahead of time. I also made sure to broadcast the question after sharing it in the large group, let them know how much time they had in their small groups, and wait for everyone to return to the large group from the breakout rooms.

Now, when social interaction is more challenging than ever, we need to be especially cognizant that human connection is not an add-on but, in fact, matters almost as much as the content we teach. Creating a classroom atmosphere, whether real-world or virtual, that puts students at ease and encourages discussion and personal connection does more than facilitate the understanding of content; it prepares our students to work with one another toward a deeper understanding of the material and one another.

Some of the most meaningful feedback I received after these class sessions came from my fully remote students. Unable to be a part of the physical classroom, they were delighted to be full participants instead of merely a face on the screen.

In a semester where I constantly felt split between the real instructional world and its virtual counterpart, I understood exactly how they felt.

Lisa Lawmaster Hess is an adjunct professor of psychology at York College of Pennsylvania where she teaches psychology classes and a first-year seminar. She is the author of three novels and three non-fiction books, including Know Thyself: The Imperfectionist’s Guide to Sorting Your Stuff.