Building Rapport with Students by Sharing a Piece of Yourself 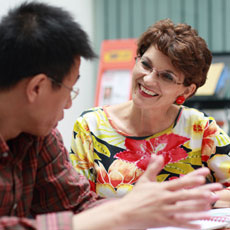 Teaching at a historically black university can have its obstacles; especially when you are not African American. One of the main obstacles for me was how I was viewed by the students — I often felt that students did not or could not relate to me. Standing before them, I did not have the appearance of one who has ever encountered any difficulties in my lifetime or career. As a result, my students did not find me very approachable in spite of the fact that I had mentioned many times that I was available during office hours and would be happy to speak with anyone. Once the students would make the effort to stop by my office, it seemed that they would learn that I am much more approachable than they had originally imagined.

I found that self-disclosure bridged the gap between the students and me and led to increased student engagement. In my case, I told them my educational history. I told the story about all of the failures, mishaps and bad decisions. I showed them the real me in a presentation accompanied with real photographs of key individuals in my life. My intentions were to let the students know that they can succeed, no matter how insurmountable the obstacles may seem. At the end of the story, I realized that my story had impacted the students. Further, grades increased in my courses by about 20% after the talk.

When I spoke, it was to a very attentive audience that seemed poised at the edges of their seats. No one was texting or doing anything disruptive. They found out their professor is a human. Not a robot.

What I shared was this: I went to college with the goal of becoming a medical doctor and majored in biology with a minor in chemistry. During my second year of college, I lost my academic scholarship because I made a “D” in a course in my major. In my junior year after meeting all the prerequisites, I was accepted into dental school. Upon arrival at dental school, I found out I was pregnant. During my first year of dental school, I gave birth to a daughter. I discovered after the first two years that I did not like dentistry as much as I thought I would. I dropped out of dental school and began working as a receptionist. Due to the input and influence of a mentor who had taught me biochemistry in dental school, I applied and was accepted to graduate school. Because of this chance I finally had the opportunity to follow the dream I had denied myself all along … to teach.

Graduate school was a very difficult time for me and being a mom did not make things any easier. After the first semester, I was placed on academic probation. At the end of the second year, I took the written qualifying exam and failed. The director of my program told me that he honestly did not think that I could complete the program. One year later, I retook the qualifying exam and passed. Two years after that, I received my PhD.

Feedback from my self-disclosure was all positive. Here are just a few of the things students shared in response:

Being able to have an impact on students has been my goal from the beginning of my teaching career. I believe that my self-disclosure had a direct impact on my effectiveness as a professor.

Now it’s your turn. What are some ways you humanize yourself to help build rapport with students? Please share in the comment box.

Dr. Leslie Wooten-Blanks is an assistant professor in the department of biology at Claflin University.