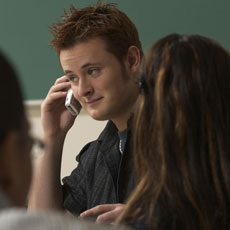 Most people, when they conceive of hell, conjure up an image of a subterranean inferno to which sinners are forever consigned to an afterlife of endless suffering and punishment. But according to Dr. Gerald Amada, author of Coping with the Disruptive College Student: A Practical Model, hell also can take many temporal forms, especially in the world of academia.

“Hell can be the daily ordeal of having a student in the front row of your class chewing gum much in the manner of a gapped-jawed alligator devouring an opossum,” he says. “Hell can be the student who persistently uses your class to stretch out and catch up on his sleep after late-night partying. Hell can be the student who scowls at you each day and constantly interrupts your lectures with reminders that he knows more about the subject under discussion than you do. Hell can be students who plagiarize, use cell phones in class, chronically and rudely arrive late to class, use bullying tactics to extort higher grades, and incessantly chatter with their classmates as if your class were a social club.”

In the recent online seminar Proven Strategies for Managing Disruptive Student Behavior, Amada revealed his time-tested strategies for restoring classroom civility. Whether it’s the students who begin packing up their belongings a few minutes before the end of class, the students who are always late, or the students who dress provocatively, the key is to address the misconduct in a timely and decisive manner, he says. Don’t wait until you’ve reached your breaking point.

“Generally speaking if students are approached in the spirit of good will and humor, it is likely they will respond in kind, and be open to changing their inappropriate behavior,” he says. “Too often instructors allow their objections and resentments over student behavior to fester and immobilize them and then when they finally act, they overreact.”

In addition, permitting rude and inappropriate behavior sends the unspoken message that it’s OK, and the unwanted behavior will likely escalate and spread to other students. Meanwhile, those students who are following the classroom rules will not only resent the disruptive students but will resent the instructor for allowing the few problem students to poison the entire classroom climate, says Amada.