Love the One You’re With: Creating a Classroom Community 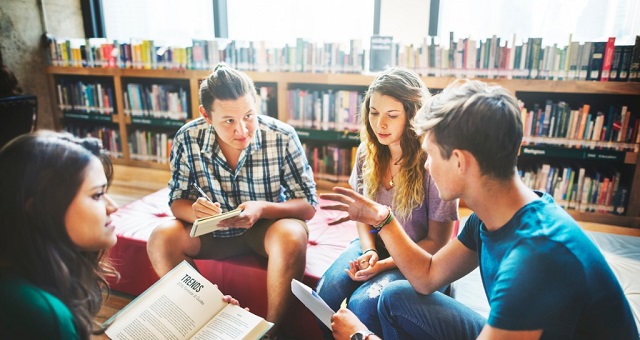 It’s the first day of class. They shuffle in, spot similar life-forms, and slip in with that group. Hipsters sporting wild hair and tats, buttoned-up and serious young scholars, middle-aged moms and dads, maybe a couple of aging hippies. One or two sad souls choose spots isolated from the others; they don’t want to identify with them for reasons of insecurity, arrogance, or something else.

Every good teacher knows that learning doesn’t happen in isolation. Creating a learning community gives students a sense of security, study pals, and somebody to double-check with about assignments. While once upon a time classrooms were largely homogenous, filled with young white males who shared many of the same real-life experiences, these days most classrooms can, at first glance, seem to be a wild cacophony of humanity, tender and tough, curious and hostile, open-minded and most definitely, absolutely closed.

From the moment the class passed the threshold, I feared this was one pot of stew that was never going to mingle flavors. It wasn’t just that there were a number of different “types,” it was that already, 43 seconds into class, an invisible but palpable distrust was rumbling just below the pitch of human hearing. However, it was not below the pitch of teacher hearing, and it filled me with fear. I had Goths and girlie-girls, straight-shooters and loose cannons, bookworms, and back-row mutterers. I had a guy proudly sporting a spaghetti stained chef’s hat, and another proudly displaying a bald and vibrantly tattooed skull, and they were glaring at each other.

I opened my mouth to say, “Class dismissed.” Fortunately, my inner administrator reminded me that if I dismissed them before the first class had even started, I would lose my job. My mouth has a mind of its own (often not a good thing) and instead, I said, “Let’s dump the desks.”

“Huh?” the class sang in unison. A good sign. Unison.

“Shove them out of the way and make two circles facing each other.”

“You with the gorgeously tattooed skull, you’re in charge. Make them do it!”

He glared. They scrambled. It was done.

The circles formed, the inner circle facing the outer one. They looked almost ready for some spontaneous folk-dancing.

“Inner circle: You’ve got one minute to pry out as much interesting information from the person you are facing as you possibly can. Skip the boring stuff parents ask their kids’ dates. Ask what they’re afraid of, if they’ve ever been lost, or what makes them laugh hysterically.”

“Ummm,” a girlie-girl trilled, “Like, what are we supposed to be doing?”

“You are speed dating,” I said. She perked up immediately, as did several of the older returning students who probably hadn’t dated in a while. “When I flick the lights, everyone absolutely stop talking—even if you’re in the middle of a word. When I flick them again, outer circle has one minute to ask questions. After your two minutes are up, inner circle steps to the left, outer circle stays put, and do it again. Go!”

“Are you crazy?” my inner administrator said. I didn’t bother to answer. The room became a concert hall filled with glorious word-music—murmurs and mutters, giggles and snorts, the rapid gallop of syllables leaping atop one another, all rising to a beautiful crescendo…

I flicked the lights.

Words. Conversations. Eye contact. Here and there, a hand reached out to touch a shoulder, mouths slipped from crescent-moon grins to open laughter.

And thus it went. Round and round the room they probed and questioned and probably overstepped bounds, but nobody complained so I let them be. When everybody had finally met everyone else and it was time to sit down, I saw several students grab their bags and books and slip next to someone from a completely different group. We reviewed policies and talked about my grading system, and they actually listened. But that wasn’t the best part. The best part was when the chef-hat guy and the tattooed skull guy left class together, their charmingly ridiculous heads tipped, chuckling over who-knows-what.

Dr. Cynde Gregory teaches composition and literature at Gwinnett Technical College in Georgia in addition to tutoring second language learners of all ages.

This article originally appeared on Faculty Focus in 2013. © Magna Publications. All rights reserved.