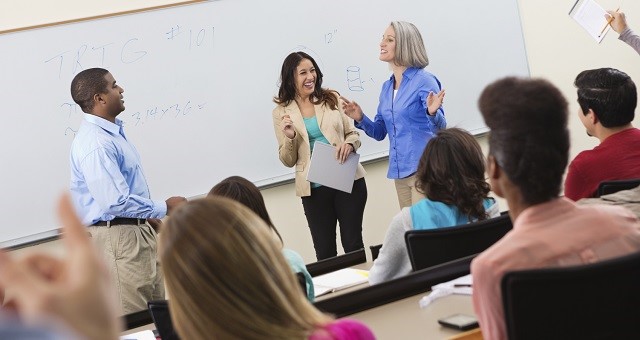 Most higher education institutions are not organized to encourage, support, and reward collaboration. Yet, collaboration—across disciplines, functional units, institutions, and organizations—is a highly effective way of dealing with complex issues.

In their book Organizing Higher Education for Collaboration: A Guide for Campus Leaders (Jossey-Bass, 2009), Adrianna J. Kezar and Jaime Lester share the lessons learned from their analysis of four campuses with extremely high levels of collaboration. In an interview with Academic Leader, Kezar talked about the driving forces behind the collaboration movement.

Collaboration is being driven by the following factors:

1. Funding—“Almost all the stakeholders that provide funding for education are interested in collaboration. That’s a pretty powerful message to be sending, and it has an influence on the disciplines,” Kezar says.

External funders are not basing this on some abstract ideal. “They’re seeing in all their research that the better answers to significant issues—whether in energy, health care, or nanotechnology—are all multidisciplinary,” she says.

In addition, collaboration is a way for institutions to remain relevant at a time when the public is becoming less likely to support programs if they don’t see their relevance. “Disciplines ignore this at their own risk,” she says.

“Interdisciplinary and multidisciplinary work have been around for hundreds of years, but it is now considered by many to be exemplary work, particularly in the sciences, and sciences drive the other disciplines. We see fewer science articles that have single authors. That’s spread to social sciences and is even getting into the humanities, where it is becoming the norm. The disciplines are shifting in terms of what they see as valuable,” Kezar says.

2. Internationalization—Ten or 15 years ago people said that higher education institutions in the United States needed to become more international, which was largely ignored, Kezar says. However, in the last five years internationalization has taken off, “and it is impossible to do this work unless campuses get better at collaboration. That’s been a significant lever and one that has become more entrenched and established than at the time I was writing the book,” she says.

3. Cultural changes—Kezar says that incoming faculty will also be a factor that drives institutions toward greater collaboration. Citing the work of Ann Austin, who interviewed hundreds of faculty entering the professorate, she says, “They’re different from faculty from previous generations. They want to collaborate. They are interested in being part of a social community. They want to try out innovative pedagogies. … They don’t want to be isolated scholars who sit in libraries with stacks of books, alone.”

In addition, incoming faculty are bringing their interest in social networking technologies to campus, which will likely help facilitate collaboration, Kezar says. “I hinted at this in the book, but it’s becoming even more prevalent on campuses [today].”

4. Intrinsic rewards—A big motivation for collaboration is the intrinsic rewards that collaboration offers. “It makes work more enjoyable in many facets. I think that when I talk to people on these campuses the reason they kept doing it was, ‘I’m having more fun with my research’ or ‘I was bored to death with my teaching. Now I’m teaching with these other people, and I care about my teaching again.’ And when service is taken in a more authentically collaborative way, they’re showing up at meetings. They have more of a shared sense of purpose. People enjoy it more. The intrinsic rewards are huge,” Kezar says.

Excerpted from Leading the Way Toward Collaboration, May 2009, Academic Leader.